Press CTRL + D to add the file called frmSmaGetNames.vb from the above folder into your project (or right click on the project and choose to add it as an existing item).

Do the same thing to add the form called frmSnogMarryAvoid.vb into your project from the same folder.

Change your project's properties to make frmSmaGetNames the default form for your project.  When you run your project, you should see this: 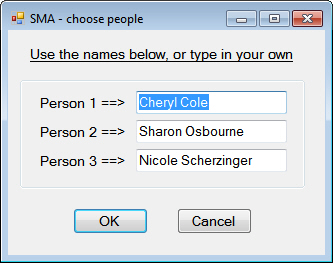 The form loads with default people, but you can change these to suit your tastes.

Before continuing, have a look at the existing code to see what it does.  You should see that this creates a public variable called Persons, whose private equivalent is called pPersons.

This is a commonly used technique in Visual Basic - you should start to get used to it!

Start to write the code for the second form so that it works!  To begin with:

Here's how to refresh a listbox's data source:

Finish your code so that it works however many people and options you have (you may, for example, want to choose to play chess with someone, or show them your etchings).  Here's what the result should look like: 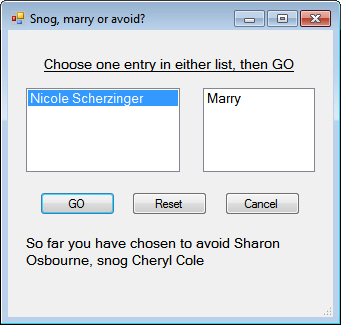 The model answer contains 2 properties, 2 event-handler routines and 3 other procedures, for comparison.

When it's all working, run the application and check it works.  Now to translate this into reality ...