Outstanding course feedback
Average score 9.41/10, based on our 1,804 latest reviews

We don't use freelancers ( here's why ), so your course will be given by one of these good people (although strictly speaking Rachel doesn't actually train, so you're more likely to speak to her by phone or email):

Andrew has a first-class degree in Biology, trained as a teacher, and studied for a PhD on the evolution of East African cichlid fish. He is thus one of the few people in the world who is an expert on both Lake Malawi cichlid fish and Visual Basic for Applications!

Dave has a degree in Physics from King's College London. He has a large collection of antique scientific instruments, but reserves his main passion for gliding (although he seems to spend a disproporionately large amount of time on the ground, doing his gliding club's accounts).

Jenny has a degree in PE and computing from Liverpool. She used to play a lot of badminton and netball when she was younger, but now spends her spare time participating in and organising running events. She is currently Wise Owl's only qualified Australian netball coach.

Rachel has a degree in Maths and PE from Reading, and worked as a teacher in the UK before moving to Zanzibar to become a teacher trainer (through VSO). Several roads later finds her at Wise Owl! Out of the office she enjoys gardening, and especially watching the taddies evolve each year in her pond.

With a degree in Psychology from the University of Glasgow, Sam will undoubtedly be worried about the rest of the Owls' mental states! When he isn't trying to be funny, he enjoys dancing away at ceilidhs in full kilt or hunting down dragons with friends.

Shaun left university as a qualified sound and video engineer before embarking on a career in finance. He then made the move into training, and has never looked back! Shaun divides his time between training for triathlons and entertaining his 3 children.

Click for larger image
If you want to see what we all REALLY look like here's a picture from a recent first aid course, with one of our delegates being "trained" (he's the guy with the checked shirt). Note that we're much smarter than this when we're training! 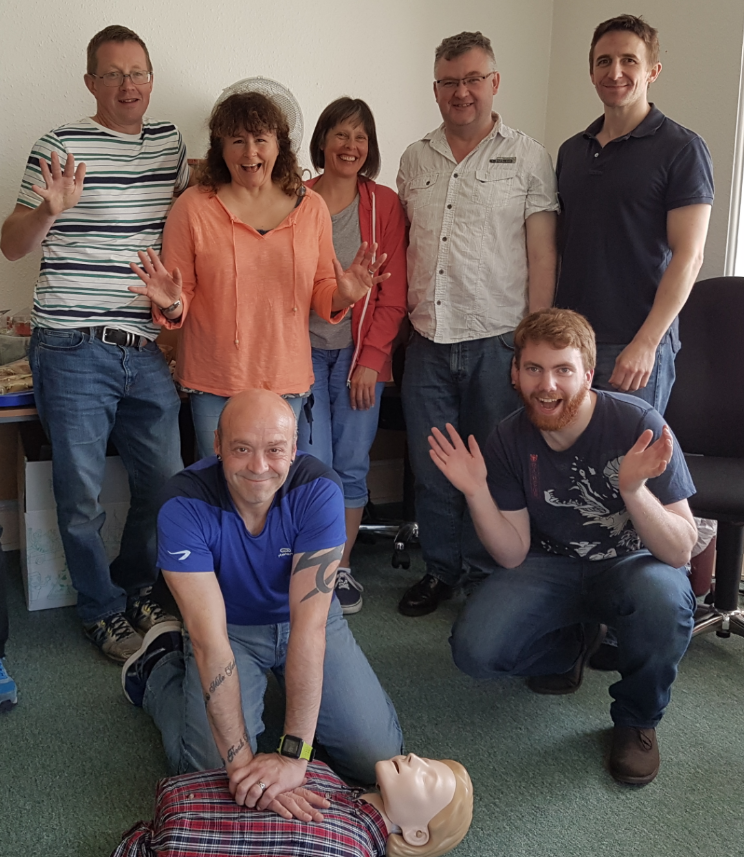