Right-click on your project in Solution Explorer and choose to add the form from the above folder (you can alternatively press SHIFT + ALT + A ).

The idea behind this exercise is that you should be able to choose your Countdown letters by clicking on the vowel and consonant buttons as required: 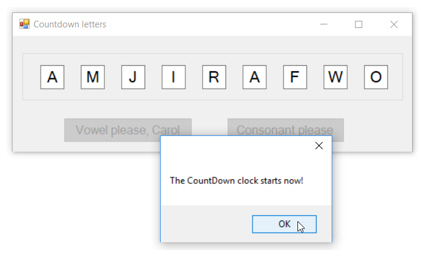 This is the sort of thing you should see when everything's working (this one's a bit easy - there's an obvious 9-letter word in FWORJAAMI).

Lots of help now follows, but before turning the page, have a think about how you might design a Letter class to hold each letter chosen.

Every time you click on one of the two buttons, your code should generate a new letter of the appropriate type (vowel or consonant) and add this as a textbox to the form.  Here's one suggestion of what this code could look like, for adding a vowel:

'this is a vowel

'add it to the form

'check how many letters there are

The CheckNumberLetters method should count how many letters have been added already, and if this is now 9 it should:

The above shows just one way to solve this problem.  With classes there is rarely a right and a wrong way - just degrees of elegance.

To get the code above to work, create a Letter class and give it the following methods and properties:

Create the following fields and constants in your Letter class:

'the number of letters so far

'the horizontal offset for the first letter

'the horizontal offset for all other letters

Create a read-write Boolean property called IfVowel, then a public read-only property called Choice which should return the letter generated.  You may find the following two lines of code useful (although you'll need to amend them):

'get a random number between 1 and N

'return the letter at this position

Now create the AddForm method, which should begin like this:

'add the letter as a textbox to the form's groupbox

The easiest way to get this code is to add a textbox to the group box within the form, then copy and edit the generated designer code.

When everything is working, generate a Countdown word using your system (but don't worry about the fact that it gives equal weight to common and obscure letters).