Movies come in a variety of different genres - these are currently stored in separate workbooks. Using the Folder data source option combine all the genres into a single data model table:

The files in the above folder that you want to combine (but see hint below).

This will give you 321 films, in 3 different genres.  Return to Power BI proper and create a Table visual to compare their lengths:

Your table should show the average run time for each genre.

It would appear that the shorter the movie, the better it is.  Let's test this hypothesis by adding some truly terrible movies into our data model!  Firstly, rename the file Awful Films.xxx in the above folder to Awful Films.xlsx, then load it into your data model: 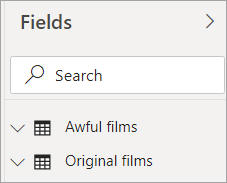 You now have two tables (which we've renamed), which you should combine as explained below.

Use the Append option in query editor to append one of these queries onto the other.  You should now have 326 films in your combined table, not 321:

The combined table of films, beginning with the 5 awful ones (at least according to Wise Owl).

Create a column chart based upon the combined table to test your hypothesis:

It seems as if the hypothesis doesn't stand up in the face of data!

Optionally save this as Are shorter movies better, then close it down.

You can unzip this file to see the answers to this exercise, although please remember this is for your personal use only.
This page has 1 thread Add post
Agnessia   Reply to AgnessiaReply
02 Dec 18 at 02:11

You were correct!  I've rewritten the exercise, and it should all now work - thanks.

the files are still missing. Only "Awful Films" is there with correct extension .xlsx.

OK, I really HAVE updated them now - just checked.  Missed out one stage of the process before.