Open the file in the above folder in Power BI Desktop.  It's missing a certain je ne sais quoi:

Create a table called Film measures to hold your measures:

As a reminder, in Power BI you can click on this tool to start creating a new table. 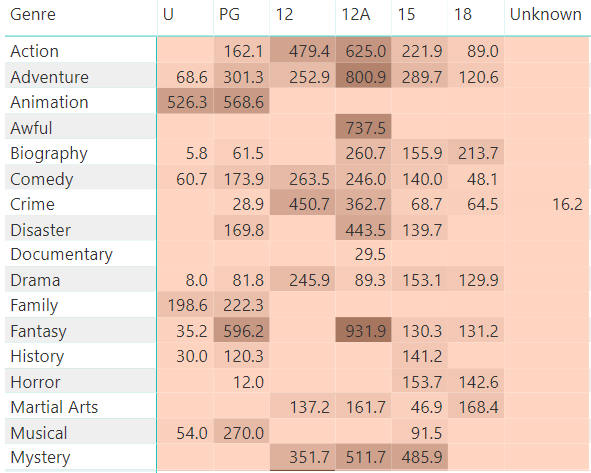 You can right-click on the measure in the field well to apply conditional formatting by this measure (in this case to show that 12A Fantasy films have the highest average box office takings - although if you scroll down you'll find 12 certificate Romance films do even better).

Create another measure called Average Profit, to show the average difference between the box office takings and budget for each film: 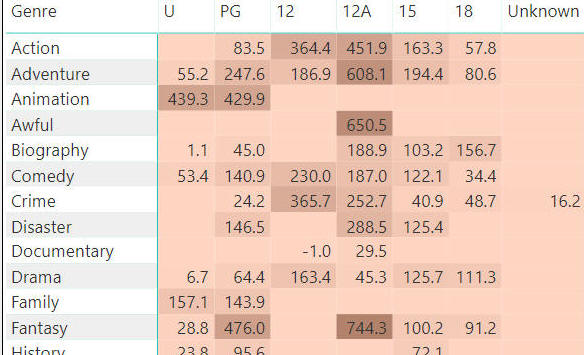 Once more, 12A Fantasy films rule (although again, scrolling will reveal that 12 certificate Romance films do even better).

Because you're averaging an expression, you won't be able to use the standard AVERAGE function.

Create one more measure called Number of films to count the number of films for the filter context (use COUNTROWS).  Create a table on a separate page to show your measures:

Inside information: depressingly, the two films which propel 12 certificate romantic films to the top of the list are Ghost and Titanic.

You can click on the Average profit column heading to sort the genres in descending average profit order (although you probably knew that already ...).

Save this as Just let go, then close it down.