In Channel 4's CountDown contestants choose 9 letters (made up of vowels and consonants); they then have to form words which are as long as possible from this selection.  The aim of this exercise is to help with the letter selection process!

In a new or existing project, create a new form called frmCountdownLetters and add two buttons and a GroupBox control to get:

Delete the Text property of the GroupBox control, so that it appears as a rectangle only.

Before turning the page, have a think about how you might design a Letter class to hold each letter chosen.

The aim of this exercise is to be able to request vowels and consonants to create a series of 9 letters:

A game after 7 of the 9 letters have been requested.

When you finish, you should see this:

This message should pop up when you've chosen 9 letters.

Read on for how to make this all work!

Our aim will be to attach code to each button to create a new text box containing a random character of the correct type.  For example, here's what the Vowel please, Carol button could run:

// check how many letters there are

The CheckNumberLetters method should check the number of letters already added, and if this is 9 it should:

To make the code above work, you need to create a Letter class to contain the following properties and methods:

Note: this isn't necessarily the optimal solution, and you are welcome to implement your own class design if you prefer it to the one shown above.

First create the Letter class, and give it a variable called NumberLetters to hold the number of letters which have been processed.  Create a constructor for the class, and use this to increase the value of NumberLetters by one whenever a new instance of the class is created.

Create the following fields and constants for your class:

// the horizontal offset for the first letter

// the horizontal offset for all other letters

Create a private read-only property called Choice which will return the next vowel or consonant, according to the value of the ifVowel field.  You may find the following two bits of information useful:

Now it's time to create the all-important AddForm method.  To do this, first create the method:

// lots of other lines between

This takes a group box as an argument because we'll add one textbox to this group box for each letter found.

Now add code to this method so that it:

To save you spending ages working out the left position for each text box, use:

// set position from the left

The easiest way to do this by far is to add a text box to the form, then copy the generated designer code into your class and amend it.

Here's the sort of thing you should see after generating 9 letters in your game: 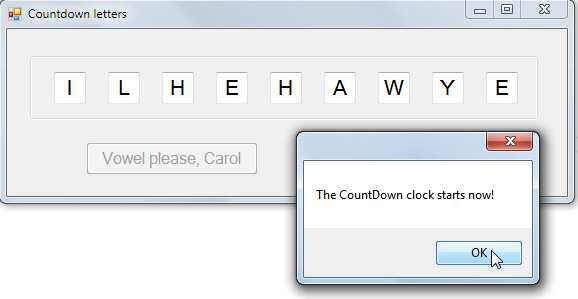 Don't worry about the fact that unusual letters will appear proportionally too often; nor that nothing happens after this message appears!

When everything is working OK, close your application and any open files.