Outstanding course feedback
Average score 9.41/10, based on our 1,878 latest reviews
If you found this exercise useful and you’d like to say thanks you can click here to make a contribution. Thanks for trying our exercises!

Add the existing form called frmMovableButtons from the above folder into a new or existing project, as well as the class called MovableButton.

Make this the default form.  When you run your project, you should be able to move the random button round the screen by a given amount: 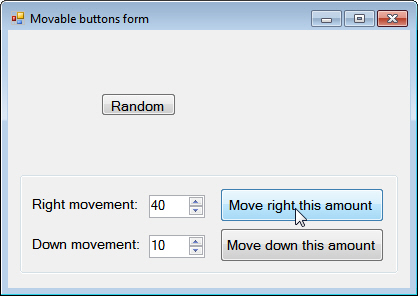 Clicking on this button would move the button 40 units to the right.

Time to introduce a delegate!  Delete and rename controls so that your form looks like this: 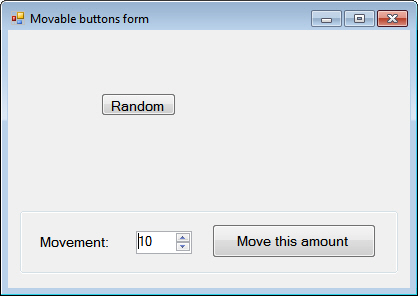 Clicking on the Move this amount button for this diagram will - when you've finished the exercise - move the random button 10 units right and down.

Add a distance field to your class:

// distance to go down and right

Now create a delegate in your class and a method to run it.  You should then be able to attach the following code to the Move this amount button:

When you click on the Move this amount button, the random button should move by the entered distance!

Adding an adapter to the class

If you still have time and energy, you could try adding a MoveHome method to your class, which doesn't take any additional arguments, and writing an adapter so you can add this method to your delegate.  More help available below!

First create an additional button in your form to allow movement to be relative to the top left of the screen: 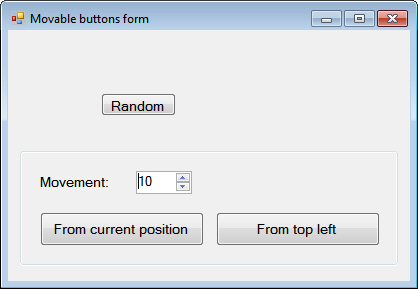 The From top left button will behave differently.

Add a new method called MoveHome to your MovableButton class:

Now attach code to the From top left button so that it adds the MoveHome method to the delegate before adding calls to MoveRight and MoveDown.

You'll need to create an adapter for the MoveHome method which adapts the signature to take a single integer argument.

Test your system to check both buttons work!