Outstanding course feedback
Average score 9.40/10, based on our 1,779 latest reviews
If you found this exercise useful and you’d like to say thanks you can click here to make a contribution. Thanks for trying our exercises!

The idea behind this exercise is to create a game of pairs.  At the end of this explanation of how the game should work some ideas are given - it's up to you whether you take advantage of these!

Let's start with how your system should work.  When you first start, you should see a form containing 18 buttons: 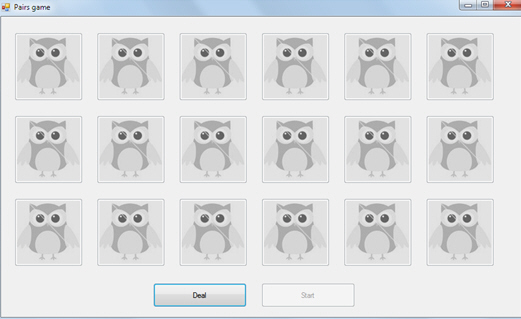 Initially only the Deal button is available.

When you click on the Deal button, your system should randomly assign the owl pictures available (see later in this exercise for how to get these) to the buttons as 9 pairs: 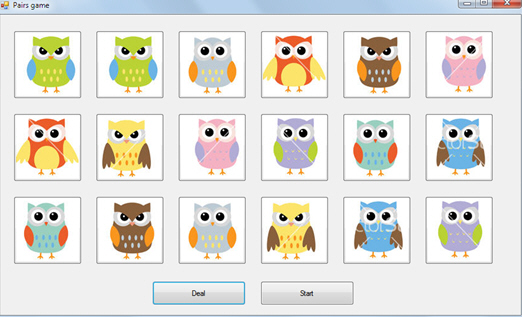 One iteration of the program - each one will look different.

When you click on the Start button you can start playing: 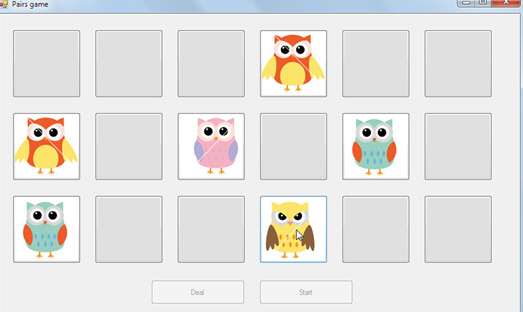 Here we've already got 2 pairs, but the third guess is wrong, and the unmatched pair will revert back to grey in a second.

When you've got all of the pairs, the system should show a congratulatory message, then close down the form.

The 9 owl pictures that you'll need are in the folder above.  You can add them in to your project's resources as follows:

Right-click on your project's Resources folder and choose to add existing items.

Thereafter you can assign an image to a button using code like this:

You can remove an image by setting the Image property of a button to null.

To keep track of which image is assigned to which button, the answer uses the Tag property of each button, which is a string of text used for no other purpose than to tag any form control.

A suggestion for how to loop over the buttons follows ...

If you know how to loop over collections, do so.  Otherwise, you can loop over the 18 buttons on a form as follows:

// control to a button

// do something to button (here we remove the image)

There's no right or wrong way to solve this, but here are the classes used in the answer:

Some other useful ideas ...

Whenever an owl picture is assigned, the relevant number is removed from the list.  This ensures each owl is assigned twice, and twice only.  Inelegant, but it works!