How to have fun pixellating and reconstructing images in VBA
You can have great fun taking your favourite image (a picture of your loved one?) and pixellating it in VBA. The results are stored as RGB numbers in a workbook - what you do with them then is up to you!

Pixellation in Excel VBA - storing your pictures cell by cell

To help me create the competition for our latest newsletter I've had to learn a bit about pixellation in VBA (picking out individual pixels from pictures).  It was such fun that I thought I'd share it! 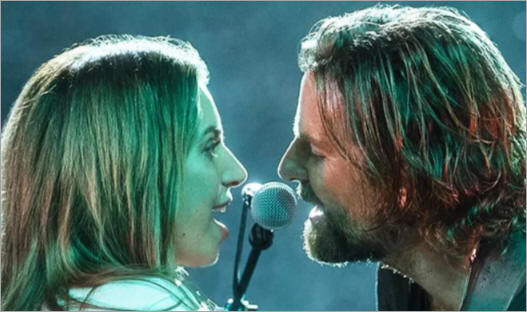 Let's see what we can do with this iconic moment from the superb 2018 film "A Star is Born".

One thing to watch out for: VBA doesn't support modern formats like PNG, so you're best off sticking to GIF or JPG.

Two warnings before we begin

This macro finds where a picture is on screen, and loops over its pixels one by one.  If you change your screen while the macro is running, you'll get effects like this: 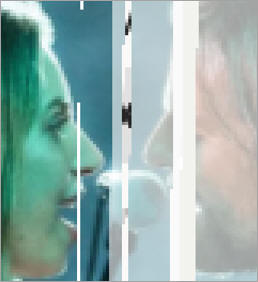 You can see that I kept leaving this screen and going back to it while the macro was running.

Also, you're unlikely to get much out of this blog if you don't already know some VBA.  And with all those horrid warnings out of the way, let's get started!

Getting started - adding a blank image

The first thing to do is to add your image as an ActiveX control, and to do that you need a Developer tab on your ribbon.

If you have already got this tab, you can skip the next couple of instructions.

To get the Developer tab visible, right-click anywhere on the ribbon and choose to customise it: 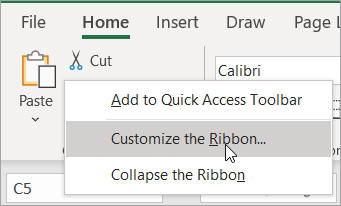 Right-click anywhere on your Excel ribbon to customise it.

The tab was there all the time - you just couldn't see it!

The Developer tab allows you to write macros in VBA - and also to insert ActiveX controls, which are just little widgets like pictures and dropdowns which you can add to a spreadsheet. 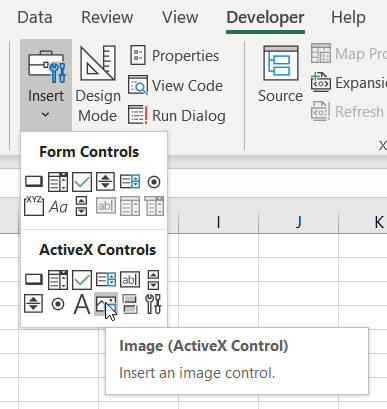 Choose this icon to add an image from the Insert menu on the Developer tab.

Draw where you want your image to go:

Draw the outline for your image.

Now to associate the image with a picture:

Attaching a picture to your image

Press Alt + F11 to toggle to VBA (you can use the same short-cut key to toggle back again), and make sure you can see the Properties window: 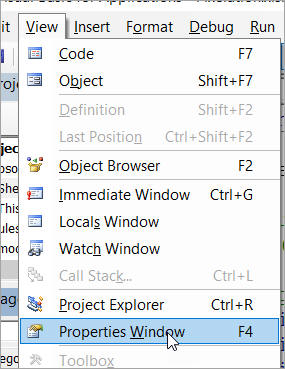 It'll probably already be visible, but just in case press F4 to check.

Go back into Excel and select your image control: 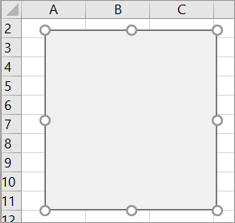 Make sure you've selected the image you just added.

Now go back into VBA and you'll be looking at the properties of the image.  Go to the Picture property, and click on the ... symbol:

We want to assign our picture to the image control.

VBA will now display (bitmap) next to the image:

More importantly, back in Excel you'll see your image: 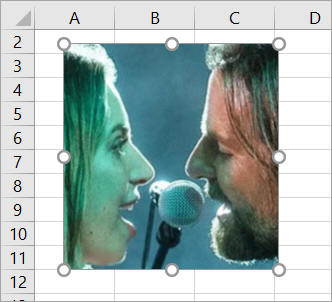 You could have changed the image name property in VBA too, but we're sticking with Image1.

Now create worksheets in your workbook to hold the red, green and blue part of your pixels, and to hold your pixellated picture:

The Sheet1 worksheet is the one containing your image.

Back in VBA, make sure these are named as follows:

You can use the Name property of a worksheet to give it an internal VBA name, making your macro easier to code.

Here's the code itself.  I've added comments to the bits I understand fully!

'the on-screen rectangle for the image

'where to start drawing

'the macro to scan an image!

'get the rectangle for the image on screen

Dim i As Integer

OriginalRow = InputBox("Which row would you like to start drawing on?")

'make picture mesh fine (draws much quicker for some reason)

'get a number representing this pixel colour

'store the RGB components, and colour the next cell

'go on to next column

'go on to next row

'debug to stop every 5th row - remove when working

'not sure why this is needed!

MsgBox "The picture has been created!"

'get screen resolution (dots per inch), so can convert units to pixels

Private Function PTtoPX(Points As Single, bVert As Boolean) As Long

'colour the passed in cell

'debug to stop every 5th row - remove when working

Without this it can be a tedious wait for the macro to finish before you can solve any problems.

I'd also strongly recommend saving your changes before testing the macro out for the first time.

Type in a big enough row number so that the drawn picture is separate from the initial one.

The macro should now start doing its stuff!

Resist the temptation to click away - doing so will ruin your drawing! 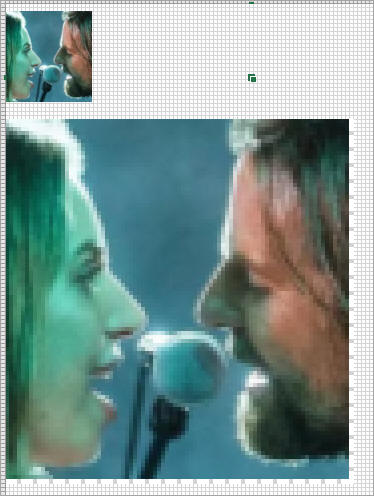 Time now to play around with it, perhaps?

Experimenting with the colour numbers

You should now be able to build your very own image processor in VBA.  Here's a macro which will take the RGB numbers and recombine them to recreate the picture on a new sheet:

'get the blocks of numbers for RGB colours

For Each c In reds

Here are some of my efforts! 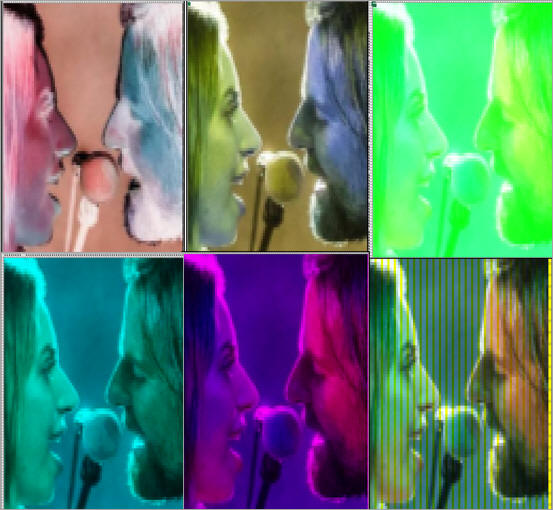 These are a bit shallow - see if you can do better.

If you get a "Too many cell formats" message, delete the extra worksheets that you've created, save and close your file then open it up again.

Experimenting with the image itself

So I had finished and published this blog, and then suddenly realised that you can start manipulating the image itself.  For example:

For Each c In r

'for every other cell in the picture ...

'.. swap its colours with the cell to its right

Here's what this produces:

Ally is only just recognisable now.

You could white out every other row/column: 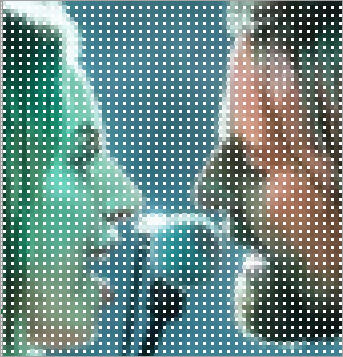 A variation on the first macro.

I could spend days doing this!