Outstanding course feedback
Average score 9.41/10, based on our 1,878 latest reviews
If you found this exercise useful and you’d like to say thanks you can click here to make a contribution. Thanks for trying our exercises! 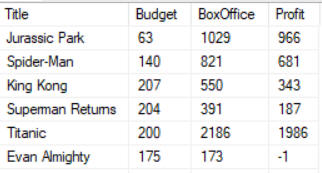 Your view should create a new expression called Profit, which subtracts the BudgetDollars from the BoxOfficeDollars column.  The view should also divide all figures by a million.

Apply the following WHERE condition to your view to pick out only films which have both the budget and the box office figures filled in:

-- both financial fields must be filled in

BudgetDollars is not null and

Test your report works, then close it down.