Outstanding course feedback
Average score 9.41/10, based on our 1,889 latest reviews
If you found this exercise useful and you’d like to say thanks you can click here to make a contribution. Thanks for trying our exercises!

Create a new report called Segregation to look something like this:

For each film we show the two fields shown and the row number (see hint below).

Now create a report variable called repRowsColoured, and set its value to be 5.

Change the back colour of each row to be pale blue if the row number is less than or equal to the value of this report variable, and run your report to check that the first 5 rows only are coloured: 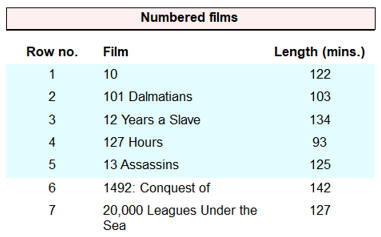 Only the first 5 rows should be coloured.

If you're feeling ambitious, try setting the value of the report variable to:

This should automatically colour the first 6 rows of your report, as there are 1,200 films, but obviously the number of coloured rows would increase as you added more films.

When you've finished trying out different values, close your report down.