Create a report called Bo Selecta, add a data source which connects to the Movies database and a dataset which returns films whose title contains robin hood.

Here's one way to achieve this.

Add a calculated field called TitleAndYear which concatenates the film's title with the year in which it was made.

Use the dataset to create a parameter called FilmID which stores the FilmID and displays the TitleAndYear.

Check that you see something like this when you run the report.

Add a dataset called RobinRoles which returns these fields:

You'll need the Actor, Film and Role tables to select these fields.

Add a filter to this dataset so that it returns only roles from the film you select in the parameter.

Add a table to the report and check that it works:

The first couple of results for the best option in the drop down list.

Alter the parameter and dataset filter so that you can select multiple films:

The first few results when you select the inferior Robin Hood films.

Add a header row to the table which displays the names of the films you have selected: 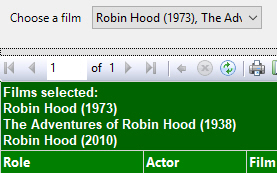 Save and close the report.