Create a report called Awards Season and add a data source which connects to the Movies database.

Add a dataset which selects the fields shown below for films with at least one Oscar nomination.

You can either add a WHERE clause to the query or add a filter to the dataset to return the Oscar-nominated films.

Insert a table into the report and assign fields so that it resembles the example below:

Apply some basic number formatting to make the data readable.

Add a field called Season which calculates the name of the season in which each film was released:

You could add fields to the table to test your calculation is working:

Check that you see the correct season name next to each film.

Use expressions to calculate appropriate formatting for each film based on the season in which it was released.  Use the example below as a guide:

Right-click the Images folder in the Report Data window to import pictures. Make sure the image names match the season names!

Insert a column into the table and add an Image report item to it.  Use an expression to calculate the name of the image to display (make it equal to the name of the season):

You may need to adjust the column width.

Add a parent group to the table using the Season field and apply conditional formatting to the header and footer rows so that it looks similar to this: 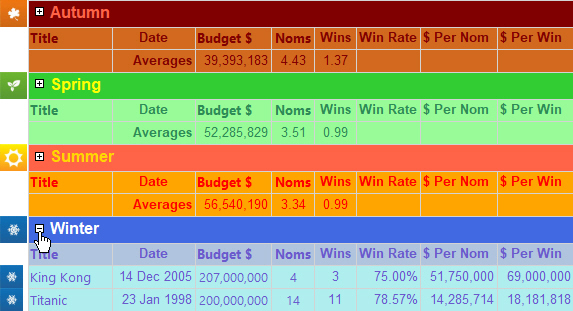 It should take you some time to achieve this!

Add expressions to the footer row for the last three columns in the table to calculate the average:

The results for Spring are shown below:

Apply some number formatting to make the results readable.

Add a filter to the dataset so that it returns only films that were released in the same month as the current date.

Running the report in November should return only films released in that month. You could apply interactive sorting as a final flourish.

Close and save the report.