Outstanding course feedback
Average score 9.41/10, based on our 1,809 latest reviews
If you found this exercise useful and you’d like to say thanks you can click here to make a contribution. Thanks for trying our exercises!

If you haven't already done so, run the SQL script in the above folder (copying and commercial use prohibited) to generate a database called MAM.

Create a new workbook, and in this create the following PowerPivot data model:

Create a pivot table showing the average square metre area for centre types, and also the average number of units:

The figures by type of centre.

No need to create any calculated fields for this: you can just include the relevant fields in the VALUES section of the pivot table and change the Value Field Settings so that Excel averages, not sums, the data.

Now create a calculated field called FalseAverage which divides one of these implicit measures by the other: 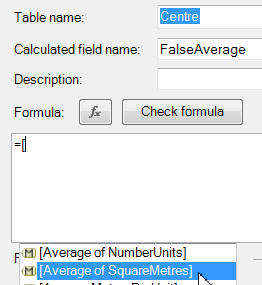 The implicit measures will appear in autocompletion.

This gives you the average ratio of floor area to number of units, but it's wrong:

Create a calculated field called TrueAverage which uses the AVERAGEX function to calculate the average of the metres-to-units ratio:

The figures are different.

The shopping centre figures are returning an error because one of the centres (Market Quay, as it happens) has 0 units in the database.  To get round this, amend your true average so that it omits any figures where the number of units is 0.

You can do this by wrapping your AVERAGEX function in a CALCULATE one.

The figures are the same for the 3 centre types which didn't have an error - as indeed they should be, as nothing has changed for these.

Save this workbook as Very average, then close it down.