Create a new Power BI report, and load into it data from both worksheets in the workbook in the folder above: 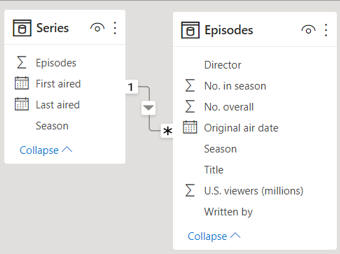 You should see this in Model View.

Hide and rename columns to get a simpler data model: 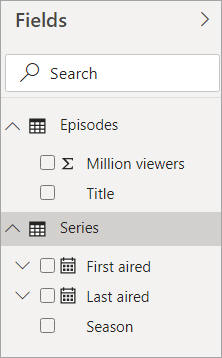 Hide some columns, and rename the U.S. viewers (millions) column to get a tidier data model, as shown here.

Create a table to show average viewers by season:

Initially your table should show these columns in the field well.

A table showing the average number of viewers of Games of Thrones episodes by season and year when first aired.

Format your table so that it looks prettier (it absolutely doesn't have to look like the example below!):

These are suggestions only! Someone has made changes to parts of the Title, Total and Column headers format sections for the table.

Save this report as GOT it.pbix, then close it down.

You can unzip this file to see the answers to this exercise, although please remember this is for your personal use only.
This page has 1 thread Add post
MA@123   Reply to MA@123Reply
12 Jun 21 at 11:48

my average million viewers is coming as 5.95 million. this value repeats for every season. how can i  correct this to make it similar to the one in the above table.

Hello! It sounds as though the tables in your data model aren't related to each other. Try creating a relationship between the First aired and Original air date columns. I hope that helps!