Just as with basic data variables, you can extend the scope of object variables to the level of a module or to an entire project.  This part of the lesson reminds you how!

Extract and open the workbook linked to in the Files Needed section above.  You'll find a version of the random numbers game we used in the previous part of the lesson.  Open the VBE and find the Roll_Again subroutine: 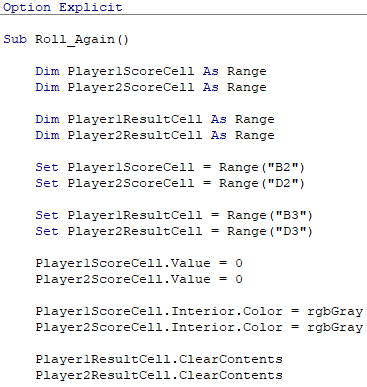 The first part of the subroutine is shown here.

We'd like to split parts of this subroutine into separate procedures.  This means we need to make sure that all of the procedures have access to the variables they need.

We'll start by creating a new subroutine in the same module which will reset the value and formatting of the score cells:

Create a new subroutine in the same module.

Cut four lines of code from the Roll_Again subroutine as shown in the diagram below:

Paste the cut code into the new subroutine you have created:

Paste the cut lines into the Reset_Scores subroutine.

In the Roll_Again subroutine, replace the cut lines of code with a call to the Reset_Scores procedure:

Add a call to the Reset_Scores procedure in the position shown here.

Test your code by running the Roll_Again subroutine to confirm that it no longer works:

The Reset_Scores procedure does not have access to the two variables so you see this error message.

To make sure that both subroutines can access the variables they need, we'll extend the scope of the variables to the level of the module.  Start by cutting the two variable declarations shown below:

Paste the cut variables at the top of the module, below Option Explicit: 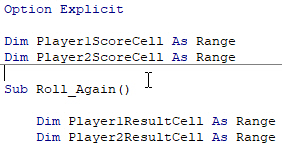 Paste the variable declarations between Option Explicit and the start of the Roll_Again subroutine.

Optionally, you can declare the two module-level variables using the Private keyword rather than Dim:

Using Private rather than Dim for module-level variables makes it easy to see at-a-glance that their scope is different to variables declared within a procedure.

Run the Roll_Again procedure to check that your code now works.

You can click the button on the worksheet to check that the code works.

If you have subroutines in different modules which need to access the same variables, you need to extend their scope to the level of the project.  You can do this by declaring the variables as Public.  Insert a new module into the project and change its name to ScoresAndResults: 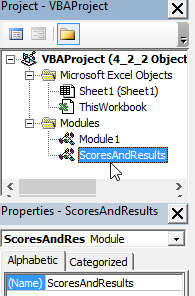 Insert a module in the Project Explorer window and rename it in the Properties window.

Create a new subroutine called Create_New_Scores in the new module you have created:

Return to Module1 and cut the two lines of code shown in the diagram below:

Cut the two lines which generate the scores.

Return to the ScoresAndResults module and paste the two lines you have just cut into the Create_New_Scores subroutine:

Paste the cut code into the new subroutine.

Return to Module1 and attempt to run the Roll_Again subroutine: 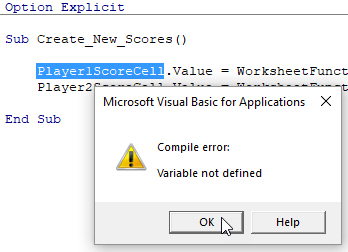 You'll see an error message indicating that the Create_New_Scores subroutine doesn't have access to the variables it needs.  Click OK and stop the code.

Return to Module1 and change the declaration of the two variables at the top of the module from Private to Public:

Declaring variables as Public makes them accessible to every module in the project.  Try playing the game again to ensure that everything now works.

In a project with many public variables it's often worth creating a separate module to hold them.  We don't need to do that for this example but feel free to do so if you'd like the practice!

To practise changing the scope of object variables to the level of a module: 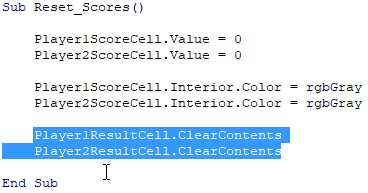 Paste the code in the position shown here.

Paste the two variables at the position shown here.

Declare the variables as Private to indicate that they can be referenced by any procedure in this module.

To practise extending the scope of variables to the level of the project: 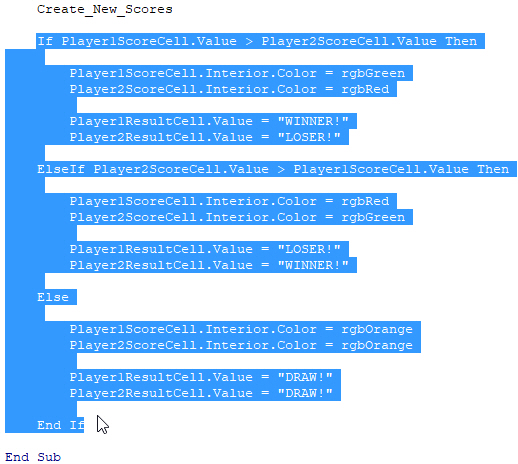 Cut everything from If to End If, as shown highlighted here. 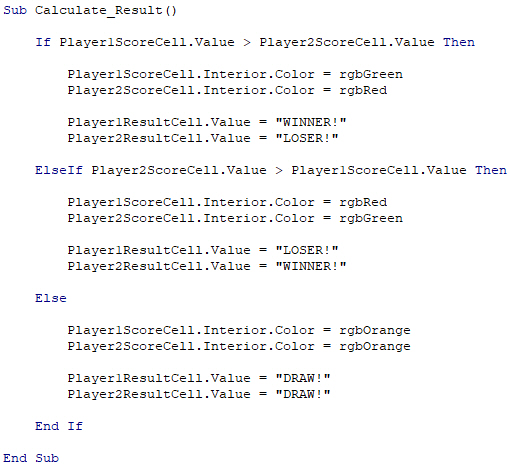 Paste the entire If statement into the Calculate_Result subroutine.

Replace the If statement with a call to the subroutine which now contains it.

Make sure that the Player1ResultCell and Player2ResultCell variables are Public.

Click the button a few times to make sure that everything works as intended.