An input box is a dialog box that allows a user to enter a value which your code can capture and make use of.  There are two types of input box you can use in Excel VBA: a generic VBA input box; and an Excel-specific version.  This section shows you how to work with the former type.

A basic VBA input box allows the user to type in a value.

You don't need any files for this part of the lesson.

You can ask for basic text input from the user with the InputBox function.  In a new workbook, insert a module and create a subroutine called BasicInputBox.  Add code to display an input box as shown below:

The InputBox function has seven parameters in total but only the Prompt is required.

Use the Prompt parameter to ask the user a question, or provide an instruction.

Hopefully your users will be capable of following simple instructions such as this one.

You can run the code to display the input box:

It's a little "no frills" but it will suffice for now.

You can customise the Title of an input box in the same way as for a message box:

Running the code shown above produces an input box similar to this:

Sadly, there's little else you can do to alter the appearance of the input box.

Asking for input isn't much use unless you capture what the user has entered!

Unless you store the value typed in, when you click OK your program will instantly forget what your name is (just as I often do after greeting delegates at the start of a training course).

Finding the Data Type Returned by an Input Box

Before attempting to capture the result of an input box, it's worth finding out what type of value the InputBox function returns.  To do this, you can type inputbox followed by a space to display a tooltip:

The tooltip indicates that the type of value returned by the InputBox function is a String.

As the VBA InputBox function returns a string, you could capture its result in a string variable:

Declare a string variable in the subroutine.

Debugging to Check the Result

You can step through the procedure using the F8 key and enter a value when the input box appears:

You don't have to take the instruction quite so literally.

After clicking OK, you can use the Locals window to see that the value has been captured in the variable:

The value you have entered appears in the Locals window.

Using the Result of the Input Box

You can now use the value you have captured in other parts of the procedure:

This simple procedure displays the value that was entered back to the user.

After running the procedure, typing in a value and clicking OK you'll see a message box appear:

The message simply displays the value you typed into the input box.

Try entering a value and clicking OK. Your code won't capture the value you entered yet, but we'll get to that soon! 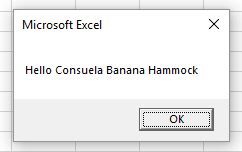 Your message will only be as sensible as the name you type in, of course. 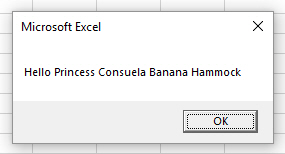 You could enter something less extravagant.