Create a new form in design view called frmMenu to resemble the example shown below: 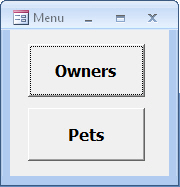 Write code in the Open event of the form so that it appears restored rather than maximised when it is opened.

Attach code to each of the buttons to:

Attach code to the Close event of each of the input forms, so that when either form is closed, the main menu becomes visible again.

Check that the system works, then save and close all the forms.