Outstanding course feedback
Average score 9.40/10, based on our 1,779 latest reviews
If you found this exercise useful and you’d like to say thanks you can click here to make a contribution. Thanks for trying our exercises!

First create a table to hold the various languages in which films can be made:

The table contains two fields: one numeric, one text.

Append records from the file called Languages.xlsx in the folder above into your table to get a table of languages:

The first few languages in the table.  Trivia question: which is the highest-grossing foreign language film of all time?

Now repeat the above steps to create a table of studios called tblStudio, importing data from the workbook called Studios.xlsx in the above folder: 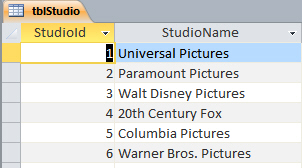 You should have 40 film studios in your table.

Close all of your tables down, saving any layout changes that you've made.