Outstanding course feedback
Average score 9.41/10, based on our 1,889 latest reviews
If you found this exercise useful and you’d like to say thanks you can click here to make a contribution. Thanks for trying our exercises! 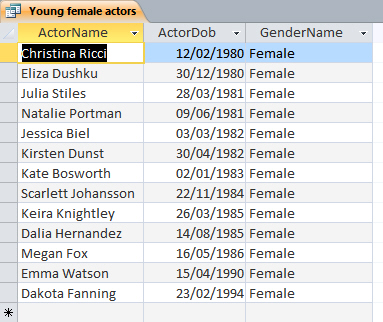 The 13 records from the tblActor table that you should see.

Create a separate query called High Scrabble Scores which lists out all of the actors who have appeared in films where the name of the character played contains an X and a Z:

You should just see the one role!

Pointless?  Now create a query called (somewhat pretentiously) sans point which lists out all of the female actors who were born in 1970 or have an X in their name (or both):

The 3 actresses you should see if you get this query right.  It's trickier than it looks!

Close down any queries that you've created.