Open the database in the above folder.

Create a grouping and totalling query which shows the highest box office by year: 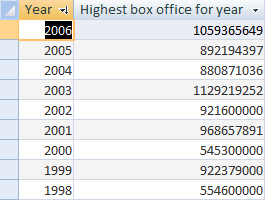 The second field has been renamed, because we want to refer to it later in another query

Save this query as BoxOfficeMaxByYear, then close it down.

Create a second query based on the first query showing the title for each year of the highest grossing film:

This query joins the Films table to a query

Save this query as BoxOfficeMaxTitles, then close it and the database down.