Outstanding course feedback
Average score 9.41/10, based on our 1,810 latest reviews
If you found this exercise useful and you’d like to say thanks you can click here to make a contribution. Thanks for trying our exercises!

Open the module that you have created called modFunctions.

In this module, create a function called YearsSinceRelease which shows the years since a film was released, using the field FilmReleaseDate in the table tblFilm.  There are some notes on how to do this below!

Incorporate this function into a query so that you are displaying films in release date order, with the oldest film first: 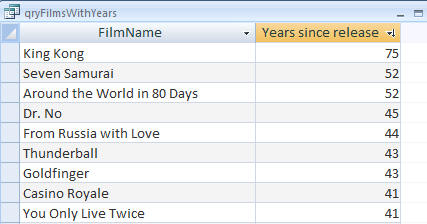 To calculate the release date, you need to take the difference between the FilmReleaseDate and today's date.  Here are two functions which may help you:

Note also that you need to surround dates with hashes to test them in the immediate window:

Without the hashes, Access would not recognise 1/1/1990 as a date

When you are happy that your function works, save and close the module.