Unpivoting data in SSIS using the Unpivot transformation
If you've been given the output from a pivot table or a cube, you can collapse it back into its original state using the UNPIVOT transform in Integration Services.

The UNPIVOT transform allows to collapse a two-dimensional array of data back into a relational database!  That sentence probably makes little sense - so read on.

The diagrams for this blog are taken from SSIS 2012, but the UNPIVOT transform has been there since 2005.

Someone has given you the following pivot table to import:

The pivot table that you have to import.

Your mission is to turn it into this:

We want to show each row separately in a table.

The rest of this blog shows how to achieve this.  You can try this out yourself using this Excel workbook.

Start by creating a data flow task, with an Excel source based on the above workbook: 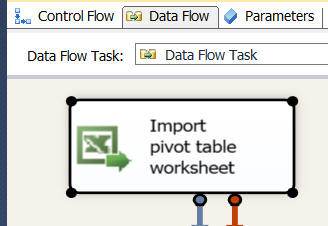 The Excel source should be based on the Pivot Table worksheet.

When you edit this source, you can preview its columns:

Double-click on the source to edit it, then click on the Preview... button as shown here.

You'll see that we have a lot of work to do! 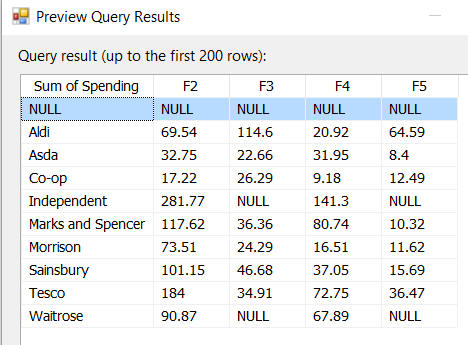 The imported data looks nothing like we want it to! 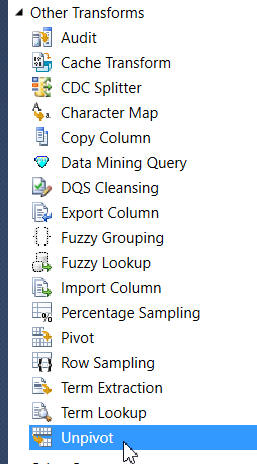 Connect this up, then double-click on the Unpivot transform to edit it: 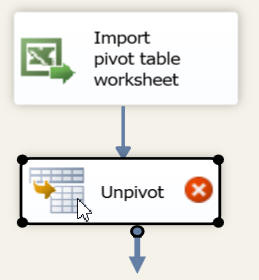 Double-click on the transform to change what it does.

Here are the columns you'll see:

The columns coming from the Excel pivot table.

Compare that with the pivot table, and it's reasonably obvious what you need to do:

To achieve this, first tell SSIS that you don't want to anything special with the Sum of Spending column (we'll rename it later, but as far as I can see you can't do this at this stage):

We'll unpivot the data for the years, but keep the Sum of Spending as it is.

You can now specify how each of the year columns should be treated, by following the numbered steps listed below this diagram: 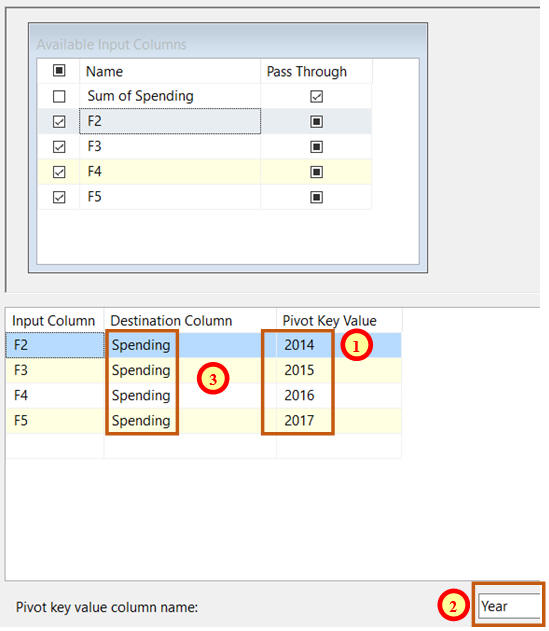 Complete the dialog box as explained below.

Add a Union all transform with a data viewer beneath it to view the output from this Unpivot transform: 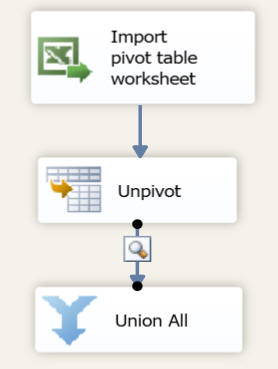 The data viewer will allow us to see what's coming out of the unpivot transform.

This is what you should see:

We're already nearly there - we just need to get rid of the null row added, and rename the Sum of Spending column.

There may be more elegant ways to tidy up the package, but I've gone for: 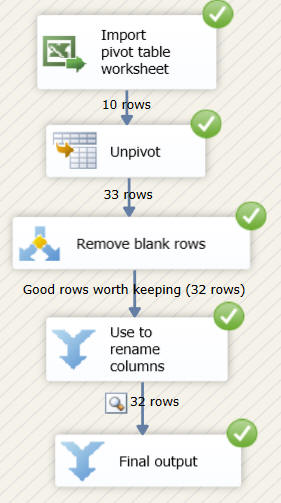 The numbers show that the conditional split transform has rejected one row.

The transform splits off rows where the spending is null - these are then not included further in our package.

I've used the union all transform to rename the Sum of Spending column to Store (there may be an easier way to do this): 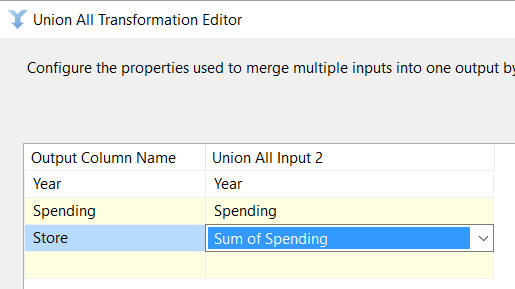 The output column name has been changed.

And that's the unpivot transform in Integration Services!