Dates and times can be the most frustrating data types to work with in SQL Server. Learn everything you need to know about the way dates work with this handy blog series and enjoy happier times!

This blog is part of a larger tutorial on SQL Server, which you can read here.  Wise Owl also run SQL courses, as well as training in SSRS, SSAS and SSIS.

Dates and Times in SQL

Working with dates and times in SQL can sometimes be frustrating: even doing something as simple as changing the format of a date can be a challenge!  This blog is designed to show you how dates work from the absolute basics through to being able to perform complex calculations with them.

When is a Date not a Date?

Answer: When it's a number!

Ok, that wasn't much of a joke, but it does have the virtue of being accurate.  In SQL (and pretty much every other computer application) a date is really just a number with a fancy format.  The query below formats a range of numbers as dates to demonstrate the principle:

The CAST function is used to change one data type into another.

It stands to reason that if we can format a number as a date we can also do the opposite: 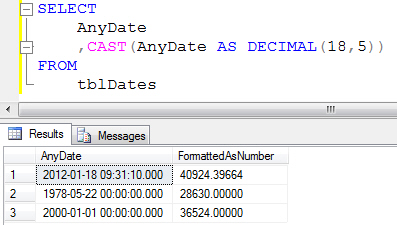 As a bit of date trivia, did you know that the earliest date you can store in a SQL Server database is the 1st of January 1753?  It's not as arbitrary a date as it might first appear.  In 1752 Great Britain and her colonies (including America) finally changed from the Julian to the Gregorian calendar.  To avoid having to provide two different date systems for dates prior to this, SQL Server only allows you to store dates in the Gregorian system.

NB: A new data type was introduced in SQL Server 2008 allowing you to store dates as early as the 1st of January 1 AD.  We'll talk more about data types in the next part of this series.

You might be thinking that this isn't particularly useful information (other than as a conversation starter at a party), but you'd be wrong!  Knowing that dates are simply numbers opens up all sorts of possibilities in terms of what we can calculate:

All of the calculations mentioned above are based on the principle that a date is just a number.  We'll show you how to create these types of calculations later on in this series of blogs, but first we'll look at the different data types you can use for dates in SQL Server.