Open the workbook in the above folder.  It gives the ten best films of all time, as listed on RottenTomatoes: 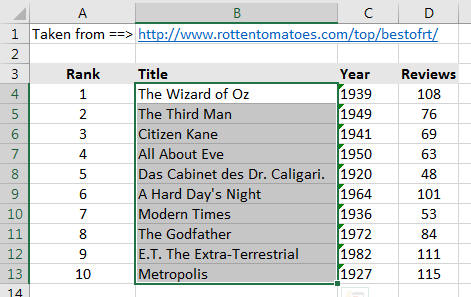 Who's this Dr. Caligari, anyway?

Your task is to write a macro to loop over the titles shown selected above, colouring in the films which have garnered more than 100 reviews.  One way to get a reference to the films to loop over is this:

'set a variable to refer to the column of films

'get a reference to block of films

Your algorithm for the rest of the macro could be:

'FOR EACH film IN the range of films

One way to colour in a cell is like this:

It might have been easier to colour them manually ...

Save this workbook as Coloured films, then close it down.