The database in the above folder contains a single table called tblBeatles, listing for each Beatle the following fields (the database is in Access 2007/2010 format, so you won't be able to open it in Access 2003):

Create a macro and assign it to the ADD THIS BEATLE button so that when you click on the button, Excel adds a record to the Beatles database: 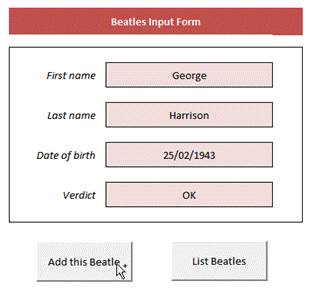 You'll need to create a connection string and open a recordset

If you get this working, create a macro and assign it to the LIST BEATLES button so that the macro reads the Beatles' names into an array from the database, then loops over this array to build up a message which it then displays: 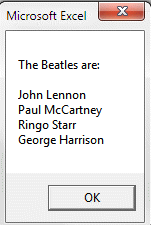 The result of running your macro to list the Beatles

Save this workbook as Beatles input form, then close it down.