The aim of this exercise is to show a list of all of the enemies appearing in Doctor Who episodes featuring Rose Tyler, but not David Tennant.

It's possible - probable, even - that you could do this with a single SELECT statement, but CTEs make it so much easier to divide a complicated query into two simpler parts!

First create a query to show the episode id numbers for the 13 episodes which feature Rose Tyler as a companion, but not David Tennant as the Doctor.

Linking to this as a CTE, show the 8 enemies which appear in these episodes (some more than once): 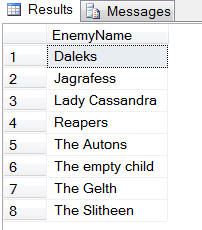 The enemies corresponding to episodes featuring Rose Tyler, but not David Tennant.

Optionally, save this query as Wonderful CTEs.sql, then close it down.