Outstanding course feedback
Average score 9.43/10, based on our 2,063 latest reviews
If you found this exercise useful and you’d like to say thanks you can click here to make a contribution. Thanks for trying our exercises!

The aim of this exercise is to create the following report:

For each film, we'll list out all of the actors who appear in it.

To do this, first create a report called Who did what, and within this create two datasets.  The first should just contain the id and name of each film:

The dataset called Films should just contain the FilmId and FilmName fields, and be based on the tblFilm table.

The second dataset should show for each role the name of the actor and the id number of the film they appear in (be careful to create the join correctly): 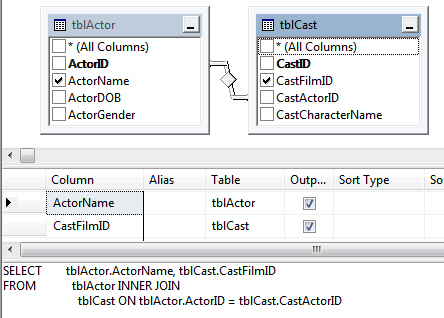 The dataset linking the actor and cast tables.

Now create your report table, and set the expression for the second column so that it joins together all of the actor names from the Actors dataset where the CastFilmId field value equals the value of the corresponding FilmId field in the Films dataset!

The expression should use the JOIN and LOOKUPSET functions - see manual for help!

When you've got this working, close down your report!