Outstanding course feedback
Average score 9.43/10, based on our 2,069 latest reviews
If you found this exercise useful and you’d like to say thanks you can click here to make a contribution. Thanks for trying our exercises!

Create a report called Tax On, Tax Off, add a data source which connects to the Movies database and a dataset which selects these fields:

Select these fields from the Film table.

In the dystopian, post-Brexit future we wish to discourage directors from distracting the workforce by making films which are too long.  To that end, we'll apply a tax to films which exceed a specified length.

The tax will be applied for every minute over the maximum.

Create two Integer parameters, including one with available values which resemble the ones shown above.

Add a filter to the dataset so that it returns only those films which exceed the maximum length specified.

Add a table to the report which resembles the example below: 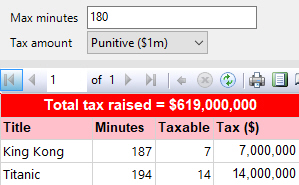 Now we just need to write that number on the side of a bus and claim it's going to fund the NHS.

Save and close the report.