Outstanding course feedback
Average score 9.43/10, based on our 2,064 latest reviews
If you found this exercise useful and you’d like to say thanks you can click here to make a contribution. Thanks for trying our exercises!

First create a new report called Spielberg, and within this create a dataset showing the films in the database directed by Steven Spielberg in film name order, with the budget for each.  Use this dataset to create a pie chart (it absolutely does NOT have to look like this one): 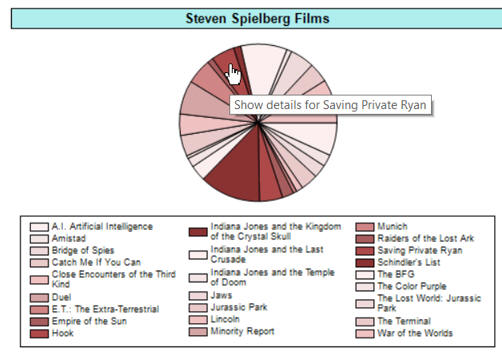 Assign a tooltip to each pie slice so it says what will happen when you click on it.

Now create another report called SpielbergFilms, which contains a list giving the details for a film whose value will be passed in as a hidden parameter called @FilmId.  When you click on a pie slice, get this report to appear:

When you click on the back button, it will return you to the main report.

Close down all of your open reports (when you're happy they're all working, that is).