Extract and open the workbook linked to in the Files Needed section above.  You'll find a modified version of an example you've seen previously: 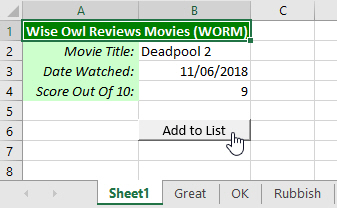 You can enter the details of a film and then click the button to copy the values you have entered.

After clicking the button, we'd like to copy the film's details into one of three different worksheets according the score awarded:

Each of these worksheets contains the column headings under which the data should be pasted: 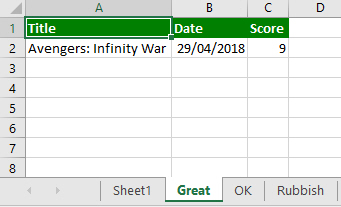 You can find the subroutine which is triggered by clicking the button in the VBE:

So far, all the subroutine does is copy the details from the relevant cells.

Using the And Operator

Write the first condition as shown here but don't add Then to the end of the line yet.

You can add the second condition after adding the And operator:

Write the second condition and add Then to the end of the line.

If both conditions have been met, the entire logical test will return True.  We'll use this to select the Rubbish worksheet:

Add a line to select the Rubbish worksheet and then end the If statement.

You can now test that the code works by entering a film with a score between 0 and 4: 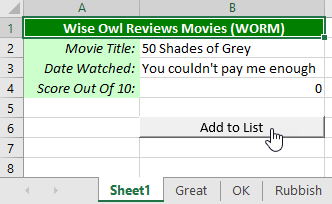 After clicking the button you'll be taken to the Rubbish worksheet: 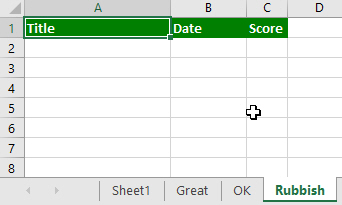 This is where you'll end up.

At this point you could add the code which pastes the copied data to the bottom of the list.  Do this below the If - End If block:

Add this line below the End If.

Try clicking the button again and make sure that the details appear in the correct place on the Rubbish worksheet: 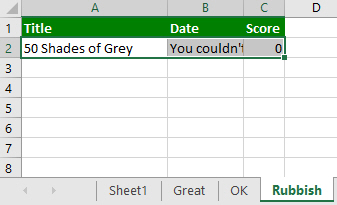 The new details will appear at the bottom of the table.

Using the And Operator with ElseIf Conditions

You can, of course use the And operator with ElseIf conditions.  Let's add a set of conditions to deal with the OK films:

Add an ElseIf condition within the existing If - End If block.

Use the And operator to add a second condition to the ElseIf:

Add a second condition using the And operator.

Add an instruction to select the OK worksheet if both conditions are met:

Select the worksheet as shown here.

You can test that this part of the code works by entering the details for an average film: 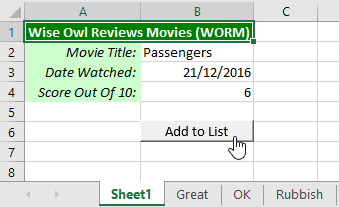 Enter some film details and make sure the score is between 5 and 8.

Click the button and make sure that the film's details appear on the OK worksheet: 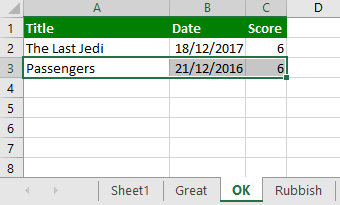 The details will appear at the end of the list.

To practise using the And operator: 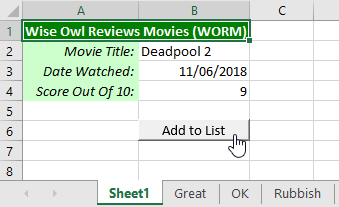 Add details for any film. 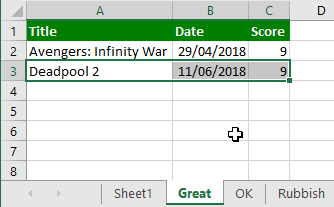 The results should appear in the Great worksheet. 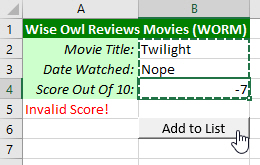 Perhaps we should have an extra condition which allows a negative score for any Twilight film.