Getting at file attributes from FOREACH loop in SSIS
SSIS makes it easy to loop over files, but it's less obvious how to get at file attributes such as the date created or last modified date. To do this you'll need a scripting task, as explained by this blog.

How to loop over most recently created files in SSIS files

I've previously blogged on how to loop over files in Integration Services, writing the name and path of each one found to a SQL Server table.  However, how do you just include files modified since a given date, or pick out the most recently created one?  This blog shows you the technique you'll need!

Creating the table of files

To save you time, gentle reader, here's the table I'm using for this example:

-- create a table to hold the files

-- the name of each file (including path)

-- when the file was last updated

Just run this script in SQL Server Management Studio to create a table with 3 columns.

Creating the package to capture each file's name

This is aimed at people who have been on our SSIS course, although you can probably get all of the information you need from my previous blog on looping over files alluded to above.  Assume that we now have the following package: 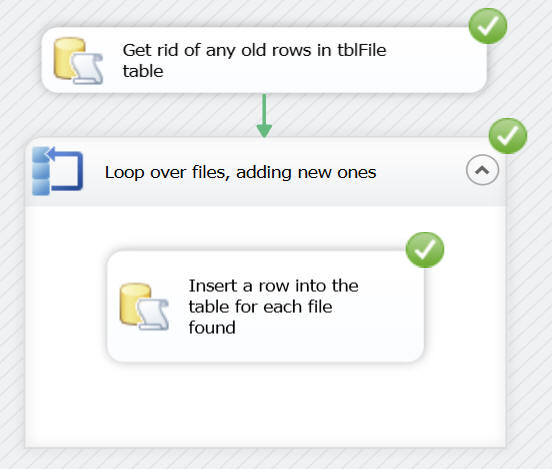 The package deletes all of the rows in the files table, then adds then back in.

The main settings for the loop are as follows:

This loop will pick out all files with an SQL extension in a given folder (and all of its subfolders); yours could do something different.

Here are the variables I've used:

The variables capture the name of each file and - later, at any rate - the date it was last updated.

The loop over files captures each file name in the FileName variable:

The first (and only) bit of information returned for each file is its name and path, which we capture in the FileName variable.

Finally, here's the SQL statement being run each time round the loop: 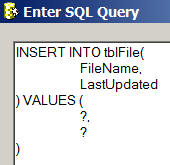 This statement will insert a row into the table of files, substituting in the file name and when the file was last updated.

Here's the parameter mapping for this SQL statement:

The first question mark will become the file name, and the second the date it was last updated.

Capturing when the file was last updated

So far all we've done is get the name of the file; how do you get other attributes, such as its size, or when it was last updated?  The only way seems to be to add a script task to get a reference to the file in code.  First add the script task: 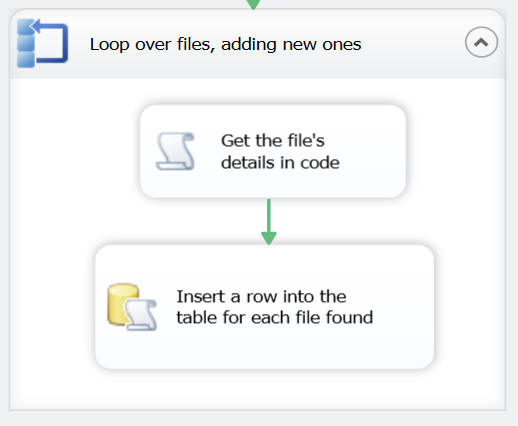 The script task to get at the file's details.

Now configure it (I'm using C# here, but the VB equivalent would be identical, apart from the choice of language):

We'll pass in the name of each file, and set when it was last updated.

Here's the C# script to get at the file's details:

// get the name of this file, including path

// get a reference to this file

// set when it was last updated (could also get other attributes)

'get the name of this file, including path

'get a reference to this file

'set when it was last updated (could also get other attributes)

Like magic, when you run this you'll get the date/time each file was last updated:

The results of running this improved package - we have the file update date/time.