What does the SCD transform in SSIS do, and should you use it?
Part three of a six-part series of blogs

We start in the same way as for the previous part of this blog.  That is:

This should leave you with this: 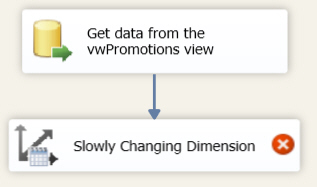 The data flow we'll start with. Time now to configure the SCD transform!

Double-click on the SCD transform, and follow the steps through the wizard (passing straight through the first information message, if it's still appearing) as below.  Firstly, as before you are trying to load data into the DimPerson dimension table: 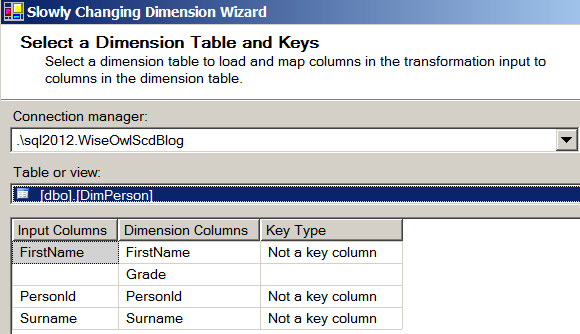 Choose to load data into the DimPerson table.

For the input columns, we're not interested in capturing when the first name or surname change (at least, not for this example), so remove these, and tell SSIS that the GradeName input column is the same as the Grade dimension column:

We'll dispense with the first name and surname columns, but we do want to capture changes in the grade.

So that SSIS can know which imported data row contains changes for which person, we need to specify which is the business key (usually this will be the unique key in the transactional database table);

The business key is the column which allows SSIS to match up rows.

You can specify lots of columns in an SCD transform for which you want to capture changes, and they don't all have to have the same SCD type, but here things are very simple:

On the next stage of the wizard, you would normally want to capture changes (it's surely the whole point of creating the SCD transform in the first place): 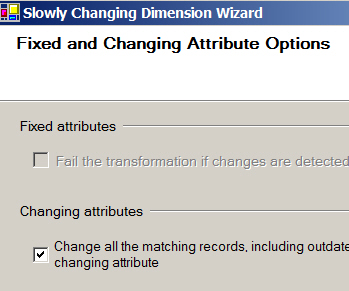 Tick this box to update the grade whenever a change is found in a person with matching PersonId. 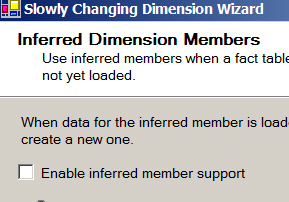 Confirm your choices on the last stage of the wizard and finish.  SSIS will create for you a diagram similar to this: 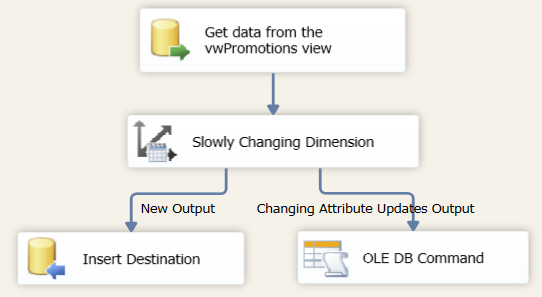 Time now to run your transform!  This is what our dimension table looks like to begin with:

Running the package should give this: 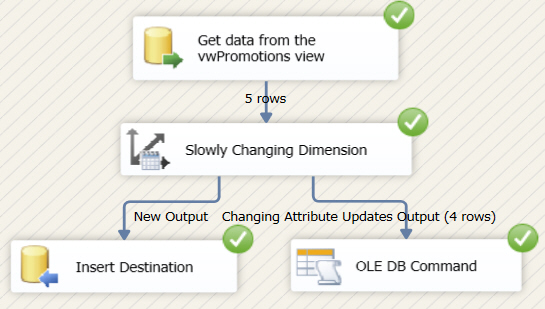 Four rows have been updated, according to this.

Rita has been promoted twice, but because no history is kept only the last one shows.

As a reminder, here was the view of changes which caused these updates:

The changes which we've passed on to the dimension table.

The drawback of type 1 SCD transforms

You'll already have spotted the obvious problem: we've lost any history of grades.  So if you want to know what Rita Smith earned in the first quarter of 2001, you can't.

Wouldn't it be nice if there was some way to capture the change history ... ?