What does the SCD transform in SSIS do, and should you use it?
Part six of a six-part series of blogs

The disadvantages of SCD transforms

I'm not a fan of these transforms, but you may disagree.  However, this being my blog allow me to put my side of the case first ...

I love SSIS.  I think it's excellent software, and what it does best of all is make complicated processes transparent.  You could give a typical SSIS package like this to someone non-technical, and they'd be able to pick up what it's doing:

Documented packages like this are much easier to read than SQL.

Try giving the equivalent SQL statements to a non-technical person, and they won't have a clue what it's doing.

However, SCD transforms do the opposite to the rest of SSIS: they make a transparent process opaque: 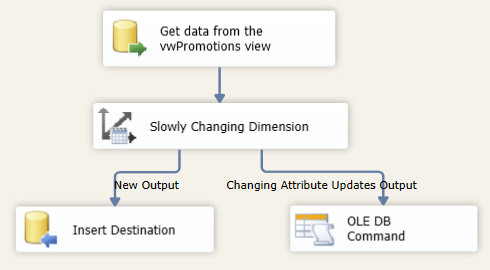 Unlike nearly every other SSIS transform, you can't edit an SCD transform directly to see what it does.

I don't mind using wizards to save me time; I don't, however, like wizards which get me from A to B but don't reveal the path taken.

The other way in which SCD transforms add opacity to what's going on is by using jargon to complicate what is actually a simple underlying process, but this is more the fault of Analysis Services than SSIS.

Here are some of the reasons that an SCD transform isn't going to be the quickest way to load dimension table data:

You can overcome some of these problems by indexing the business key in the dimension table and by changing the insert and update tasks generated by the SCD transform wizard, but SQL is always going to load slowly changing dimension data more quickly than an SCD transform.

One sign that the SCD transform isn't the greatest thing since sliced bread: the fact that many websites recommend either third party add-ons or alternative ways to accomplish the same results.

If you know SQL, I think you'd be much better of writing a stored procedure to upload your SCD data, and then call this using an Execute SQL task within a package.  For our historical attribute example, this could be something like this:

-- set the date we should record things changed on

-- update the existing people to say that

-- their grade changed on this given date

-- add the new grades in

-- add all of the new people from the fact

-- "table" into the dimension table

Note that I haven't tested this, nor have I attempted to explain it; I've included it just to show that I don't think an SCD transform does anything too scary.

Another good way to proceed would be to forget the SCD transform in SSIS, and instead do things the "hard" way by using a combination of lookup and other transforms.