Problems with Shared Datasets and Subreports in SSRS
If you're using shared datasets to populate subreports in Reporting Services you might have encountered an error when you preview your reports. This short blog explains what the problem is and offers a few simple suggestions to work around the issue.

Problems with Shared Datasets and Subreports in SSRS

A couple of subscribers to our YouTube channel have recently been having issues with subreports in SQL Server Reporting Services.

The error occurs when previewing a report within Business Intelligence Development Studio with an error message informing you that your subreport is unable to retrieve any data:

An example of the error message that you might see.

After eliminating the most obvious causes of the problem (using the wrong data type for the parameter, and misspelling the parameter name), I discovered that there is a known issue with subreports which use a shared dataset in SSRS 2008 R2.

Microsoft have acknowledged the issue but as yet have not issued a fix for the problem in SSRS 2008 R2. The problem is resolved in later editions of the software however.

As Microsoft haven't actually fixed the problem there are several ways you could work around the issue:

The image below shows the report and subreport working successfully after they have been deployed: 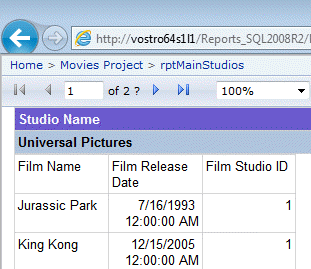 Deploying the report solves the issue, although it does make it difficult to create a neat design.