Get a preview of the 3 text functions and 11 array functions coming to your version of Excel very soon!

There are 11 new functions in Excel for manipulating arrays, all illustrated using the current state (at the time of writing) of the Northwest Counties Division 5 Central South squash league: 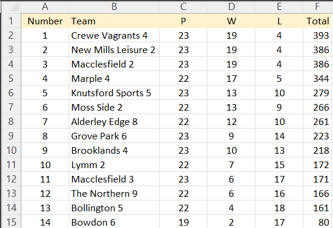 The range A1:F15 shown has been given the name League.

You can use CHOOSEROWS  to pick out only certain rows:

You can specify one or more rows to pick out. This function will show the first row (the title row), and rows 4 and 5.

Or CHOOSECOLS to pick out only certain columns: 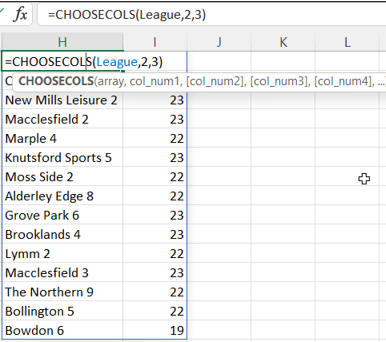 This would give the second and third column of the range only.

You can nest these functions to get exactly what you want:

You can use the TAKE or DROP function to do this.  Here's an example of choosing rows/columns to keep:

This function picks out the first 5 rows and 3 columns from the block of data (if you omit the number of columns you would get all of them).

You could achieve the same effect by dropping the last 10 rows and last 4 columns:

If you put negative numbers in, Excel will start dropping from the bottom/right rather than the default top/left.

If you want to make ranges bigger you can expand them to fill a certain range (optionally specifying what to use as padding).  Here's an example: 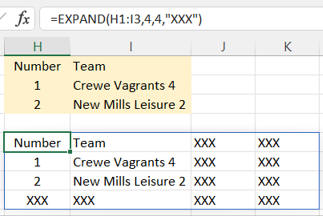 This is sometimes called broadcasting.  You can flatten arrays to a single row or single column using TOROW or TOCOL:

The first formula collapses the mini-league to a single row; the second to a single column.

Both TOROW and TOCOL take three arguments, of which only the first is compulsory:

The possible things you can ignore are as follows:

The opposite of collapsing down to a single row/column is to expand a single row or column into a two-dimensional array using WRAPROWS or WRAPCOLS:

This example creates as many rows as are needed to accommodate the 5 films in the given range, subject to having a maximum of 3 values in each row.

Both functions take up to three arguments:

You can join ranges together vertically: 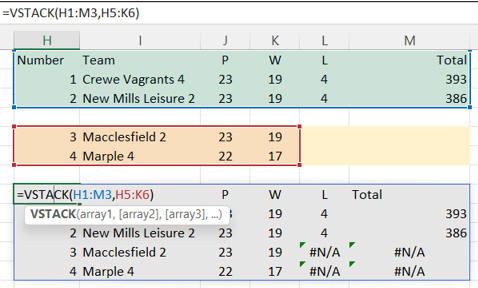 This formula combines the two ranges, one underneath the other. Because they're not the same width, any blank cells are filled with #N/A.

Exactly the same formula, but stacking across rather than down.