Power BI Channels you should watch
There are many great resources for learning Power BI, and so many of them are completely free! Level up your BI skills with some of the best. Here Sam covers some of his favourite BI channels. You even get a glimpse behind the curtain to see other channels he watches!

If you were to look at my YouTube channel it would be an odd mishmash of painting, beards, crochet, history, maths, knitting, war gaming and more. 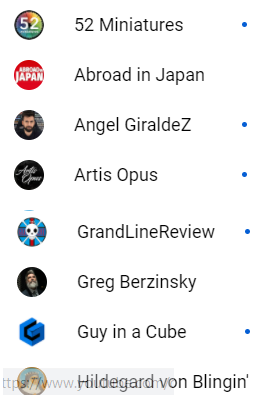 Buried in the list are useful nuggets - here are some of my favourites!

Avi has a great on camera persona, but more importantly never assumes that you have any predetermined knowledge.

His videos include interviews, in depth analysis, real life data and data workshops!

Having just launched his own live service via a personal website, Avi is more accessible than ever. Check out his large backlog of videos and wealth of free training resources.

One of the most underrated channels in my opinion, Ruth is so methodical and clear with her approach.

With so many videos every week Ruth puts my Tuesday release schedule to shame! Even if you think you are a pro, she will show you something new.

Patrick & Adam - Guy in a Cube

The first Power BI channel that I subscribed to, and still the one that makes me most excited when the notification pops up.

I've watched these videos when they just featured Adam. Then it was good, with Patrick it is great and with the new editing team? Amazing - even my wife watches!

This is a little bit of a cheat since Shane has only done a handful of actual Power BI videos. However he has extensively covered the rest of the Power Platform, showing a breadth of coverage that the others lack.

While he has no official publishing schedule, two videos a week is fairly common.

Not only will you get some serious skills from watching Shane but you will also learn all about his dog, Chewy! Anyone reading this that wants to buy me the Chewy t-shirt?

The most technical by far on this list, SQLBI is for the real BI enthusiast. Marco and Alberto literally wrote the book on DAX (The Definitive guide to DAX)!

Averaging around 3 videos a week.  Don't worry about fatigue, some videos are less than 5 minutes.

When I get questions about performance or the technical aspects of the Vertipaq engine, these are the videos I direct people to.

I would be failing to do my job if I didn't add two more onto this list!

Before I even heard the name of Wise Owl I had already watched many of the 500+ videos in their huge repertoire.

While there is no set release schedule, regular videos have been produced for the last 10 years!

There are no short videos; instead these are full length tutorials available to you for free. From C# to Power BI, if you need to learn it, Wise Owl cover it!

The newest channel by far: at barely 1 month old this fledgling is still to take flight amongst the giants above.

We're releasing a new video every Tuesday, with the promise of increasing to two when things pick up!

Instead of the long form tutorials this is our venture into the world of entertaining short form videos, often answering people's questions. Show your support by giving us a subscribe!