You can now create and use anonymous functions in Excel (usually called "Lambda functions"). Learn how to add to the stock of Excel functions without having to learn any programming code!

This page shows how you can create any lambda function by breaking it down into 5 separate steps (as you become more familiar with the concept you'll be able to merge these together):

Let's begin by defining the formula we want to calculate in our function.

The first thing to do is to check that you know what you're trying to achieve: 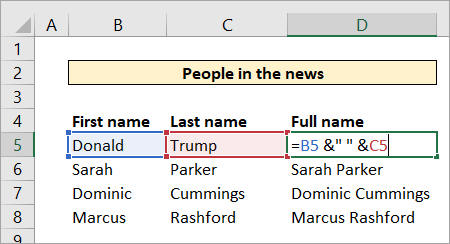 For our simple example, we will use the & key to concatenate a person's first name, a space and their last name.

Most functions require one or more arguments to work.  Our example needs to know two bits of information: someone's first name and their last name.  We will therefore create the following two arguments in our lambda function:

Note that you can call the arguments anything you like.  Good programmers use descriptive names for their arguments, to make it easier to remember what information they represent.

The syntax of a lambda function is this:

A lambda function consists of a list of arguments followed by a formula determining what the function should return.

When you type =LA into a cell the LAMBDA function should appear:

If you only see the LARGE function appearing, you haven't yet got access to the LAMBDA function (see a later page in this blog for what to do about this).

You can then type in your function (here I've pressed Alt + Enter to create carriage returns to break up the formula with new lines, to make it easier to read):

The function will take two arguments (which we've called FirstName and LastName) and return them joined together with a space in between.

When you press Enter, this will give you a calculation error:

Although you've created a function, you haven't actually passed any arguments to it.

To test your function, pass some arguments to it by adding them in parentheses after the function:

Here we're going to see if the function works with Donald Trump (resisting the temptation to insert any joke at this point).  Don't put a space between the function and your list of arguments (if you do, the formula won't work).

When you press Enter, the formula gives Donald Trump:

So far you haven't gained anything (in fact, you've just made a simple formula considerably more complex).  To make your function reusable, first copy it:

Be careful to copy just the syntax of the function, not the values you're testing it with.

Go to Name Manager on the FORMULA tab of the ribbon:

Choose to create a new name:

Click on this button to create a new lambda function (which is just a type of range name).

Type in a name for your new function, then press Tab to go to the Refers to: box:

As promised, we're calling this function WiseOwlFullName - a bit of a mouthful, perhaps.

Paste in to the Refers to: box your function code:

This is a terrible editor - if you make a mistake, it's often easier to start again rather than try to correct it! Microsoft have hinted that they may improve this editing facility in future Office 365 versions (they need to).

Press OK and then Close: 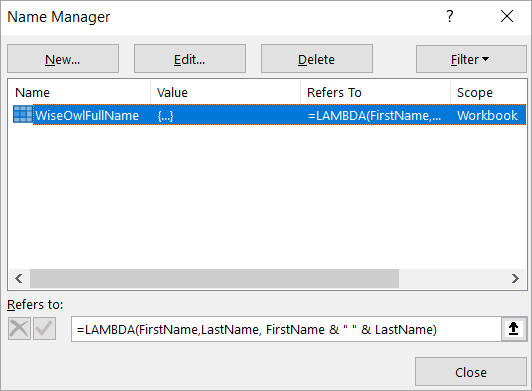 After confirming the creation of your new function, click on Close or press ESC to close down the Name Manager dialog box.

Time now to see if your function works!

Initially things look promising - Excel has heard of your function.

However, when you get to the list of arguments you're not given any help:

It's up to you to remember which arguments came in which order.

But it's all been worth it, surely?

Pressing Enter should give you Donald Trump!

Having shown how to build up a formula, the next page of this blog gives 3 examples of where you might use lambda functions in practice (the last one of which uses recursion to call itself!).