A full run-down of the impressive XLOOKUP function

I blogged 12 months ago on the (then new) XLOOKUP and XMATCH functions.  With the benefit of hindsight the one which will change Excel users' working lives is the XLOOKUP function, which makes a good claim to replace the VLOOKUP, HLOOKUP, MATCH and INDEX functions in one fell swoop.

For the examples in this blog, I'll use the following list of the top 10 films by (inflation-adjusted) box office takings (you can download the file here):

At its most basic, the XLOOKUP function finds the position of an item in a list, and returns something in a different list at the same position: 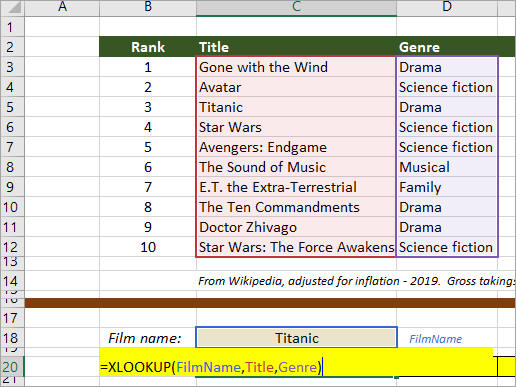 This function would show the genre corresponding to the film Titanic (as it happens, Drama).

This diagram shows why the function returns Genre.

Note that this function would work just as well if the columns of data were rows instead (so the distinction between HLOOKUP and VLOOKUP is no longer important).

What happens if an item isn't found

Previously in Excel you had to use IFERROR or other complicated functions to test whether a lookup failed - now you can just use the fourth argument to the lookup function: 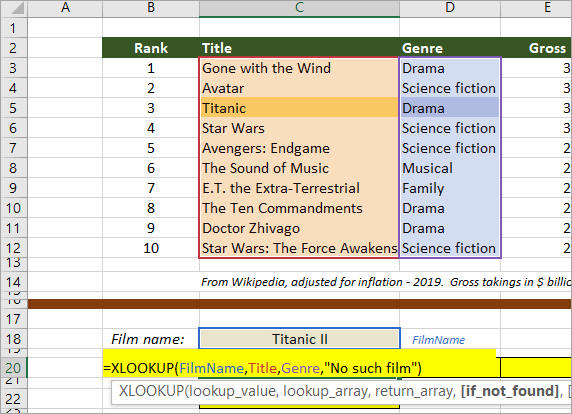 Mercifully, there isn't a Titanic II (at least, not in this list anyway) so this would return No such film (the value of the fourth argument).

Returning an entire row or column

This is another problem which XLOOKUP solves.  Previously you would have to either use an array formula or create some complicated solution which relied on numbering columns, but now you can just use dynamic arrays:

We'll create a single array formula entered in the left-hand cell, which spills over into the other two cells to return the takings and release year for any given film.

Here is the formula: 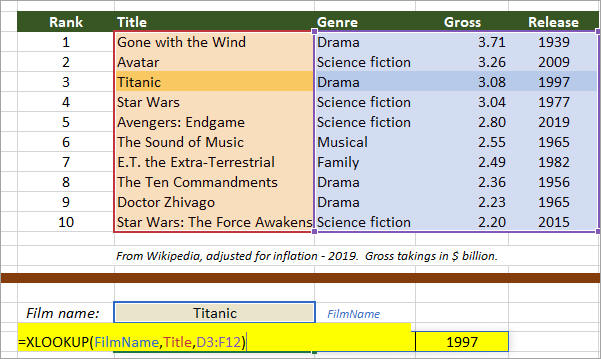 Because D3:F12 (the third argument to the XLOOKUP function, shown shaded in blue above) spans 3 columns, Excel knows to return 3 columns for the results of this formula.

The column order no longer matters

One of the big limitations of the VLOOKUP function was that the thing you were looking up against had to be in the left-most column or top-most row of a block.  No longer, as this example shows: 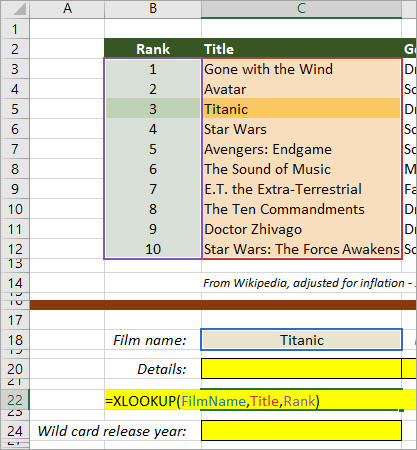 This formula is looking to see where the given film name (in this case, Titanic) appears within the Title range, and returning the value at the same relative position in the Rank range.  For this formula the value shown will be 3.

You can find the first item which more or less matches the thing you're looking for using one of the following wildcard characters:

For example, the following formula would find the release year for the first film which contains the text end in it: 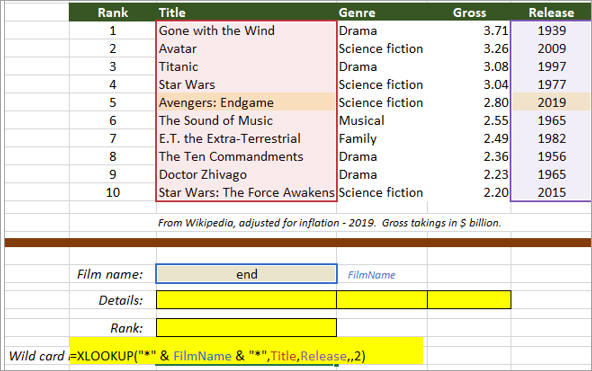 This is looking up any film with the pattern *end* (note that XLOOKUP - unlike many other text functions in Excel - is not case-sensitive).

XLOOKUP can look up or down

You can use the final argument of the XLOOKUP function to search from the top or bottom of a list:

You can either search first to last (the default) or last to first.

Here are the films to remind you of where we're looking:

There are four Drama films: the first one is Gone with the Wind, and the last one is Doctor Zhivago.

Here's how you could find the first or last item:

Summary of the benefits of XLOOKUP

Here's a quick summary to finish of the benefits of using XLOOKUP over either HLOOKUP/VLOOKUP or INDEX/MATCH:

In fact, the only reason to keep using HLOOKUP, VLOOKUP or INDEX/MATCH is that everyone else does!