Find out how dynamic arrays in Excel will change your (working) life!
Part four of a six-part series of blogs

Dynamic arrays are a new feature being rolled out in Excel 365. This blog explains how they work, and why they will make so many things in Excel easier. 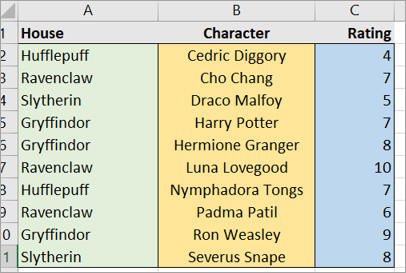 You can do this by selecting A1:C11, pressing SHIFT + CTRL + F3 and choosing Top row.

Here's an example to pick out the unique Hogwarts' houses: 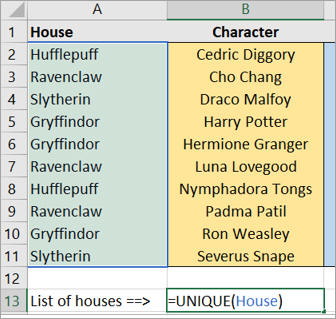 If you miss out the second and third arguments, you'll get one version of each house referenced.

When you enter the above formula, you'll get this: 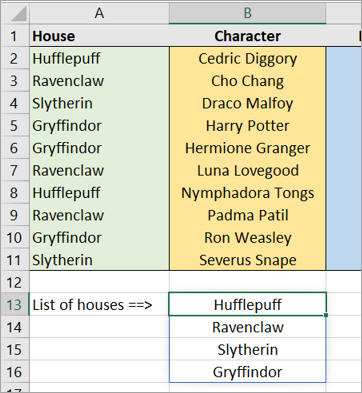 You can use the SORT function to sort dynamic arrays.  It takes these arguments:

For our example we'd like the houses to appear in alphabetical (and, coincidentally, moral) order: 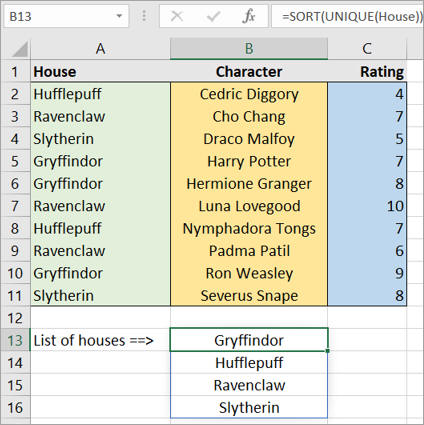 Here we're sorting the house names alphabetically (the default). The formula is =SORT(UNIQUE(House)).

Sorting one set of values by another

Supposing you now decide that you want to sort the characters according to the rating given.  To do this, you can use the SORTBY function, which takes these arguments:

Here's an example of a SORTBY function in use: 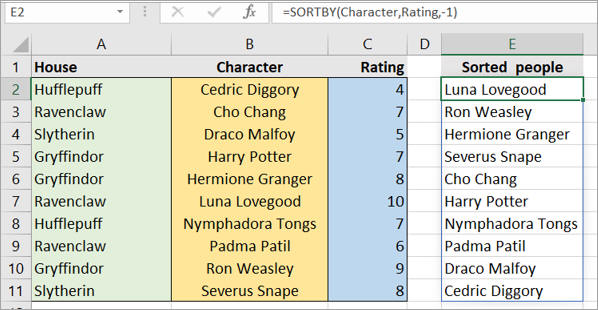 This formula is sorting the Harry Potter characters into descending order by their rating. Luna Lovegood has the highest rating, so comes at the top of the list.

You can also use dynamic arrays to pick out the rows you want, using the FILTER function.  This takes the following arguments:

So for our example, you could show all the people in Slytherin (hiss!):

This formula would filter the list of characters to pick out all the ones in Slytherin.

The two people in Slytherin returned by the FILTER function.

If you look for the people in the Treetops house, you'll get an error:

If a FILTER function returns no data, you get a #CALC! error.

You can get round this by using the third argument:

You can use the third argument to return something in the cell containing your formula.

You can combine two or more filters like this:

This function returns the characters in Gryffindor house who have a Wise Owl rating of 8 or more.

The syntax for this seems a bit ugly to me - I wonder why you can't include extra filters as additional arguments?