Outstanding course feedback
Average score 9.43/10, based on our 2,079 latest reviews
If you found this exercise useful and you’d like to say thanks you can click here to make a contribution. Thanks for trying our exercises!

Using the tblAuthor and tblEpisode tables, create a stored procedure called spMoffats to list out the 32 episodes written by Steven Moffat in date order (with the most recent first): 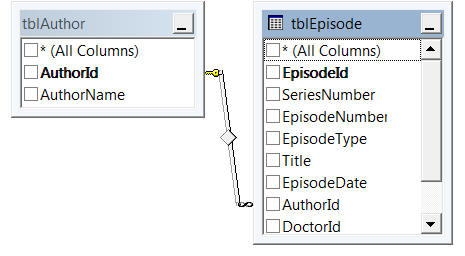 The two tables from which you need to get data

Here is what the start of the output from running this stored procedure should look like:

When you run the stored procedure, these are the first few rows that you should see.

Now amend your SQL so that it creates a different stored procedure called spRussell, listing out the 30 episodes penned by people called Russell:

The first few Russell Davies episodes (again shown with the most recently made coming first).

Wouldn't it be nice if you could introduce a parameter giving the name of the author for whom you want to list episodes, so you'd only need the one stored procedure ...

Optionally, save this revised query as Russell.sql, then close it down.