Outstanding course feedback
Average score 9.44/10, based on our 2,149 latest reviews
If you found this exercise useful and you’d like to say thanks you can click here to make a contribution. Thanks for trying our exercises!

Write a SELECT statement in SQL to list out all of the episodes which featured Matt Smith as the Doctor:

The first few of the 44 episodes featuring Matt Smith.

Two separate sets of instructions for how to do this are shown below, showing the easy way and the "hard" way.  Use the approach you feel comfortable with!

The acceptable Mickey Mouse way to create a query is to use the Query Designer.  First right-click in a new query and choose this option:

Choose to design a query using the Management Studio editor. 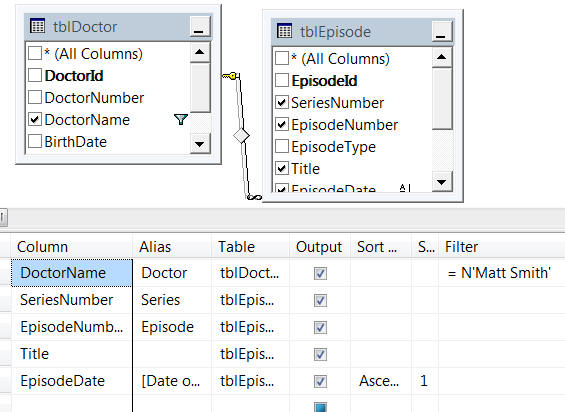 When you select OK you'll see a SELECT statement, which you can now tidy up!

The other way to create a SQL statement is by typing it.  Here is the basic syntax for a SELECT statement in SQL:

-- select rows from one or more tables

-- one or more tables joined together

-- put here conditions which must be true

Whether you choose the hard or the easy way, you should be left with a SQL statement listing out the 44 Matt Smith episodes.

Add the following at the start of your SQL to store it as a stored procedure:

Run your revised stored procedure to prove that it lists out 6 episodes:

Optionally, save this SQL as Matt Smith episodes.sql, then close it down.