Create a new package called Calculate durations, and within this create a data flow task which reads in rows from the above workbook.  Include a script component at the end: 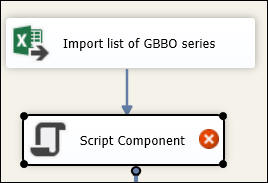 The script component has a cross against it because you haven't configured it yet!

The imported data contains two columns for each series, giving the premiere date and the finale date: 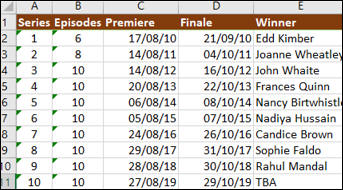 It should be possible from these to work out how long each series lasted.

Get your script component to calculate and output a new column giving the duration of each series in days, using code similar to the following:

// take the time difference, and convert it into days

Note that you'll need to pass in the Premiere and Finale input columns to the script component, but also add DurationDays as an integer output column.

Add a Union All transform and a data viewer to get this: 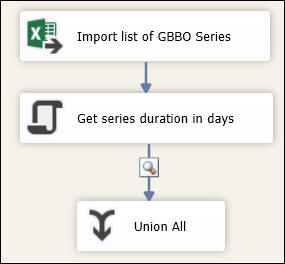 When you run the package, it should show your existing columns plus the one you've added in your scrpt component.

Run your package - you should see something like this:

Series 1 was the shortest series by far.

Take a few moments to think how much easier (and better!) it would have been to use a derived column transform to solve this problem instead, then close down your package.