Addiction to the 2048 mobile phone app
One owl's sad story of addiction to a simple computer game: a tale of lost time and lost sanity.

I've been addicted to computer games and apps for as long as they've been around (I can still recall being mesmerised by the first Space Invaders machine at the age of ... well, let's just call it n).  Apps that I've loved include:

For all of these I've been able - eventually - to get over my addiction, but there's one app which has taken over my life: 2048. 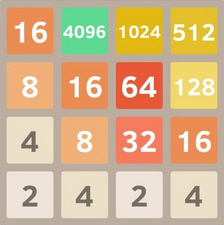 The aim of 2048 is to reach as high as number as possible by combining powers of 2. For example, if you move two 2s onto adjacent squares, they merge into a single 4.

I managed to get to the eponymous target 2048 score relatively easily, and after a fair few days of effort I eventually got the beautiful green 4096 shown above.  However, I've been trying to reach 8192 for weeks now, and I'm not actually convinced it's possible.

If you've got 8192 or higher I'd be interested to hear from you, if only to satisfy myself that it is actually achievable!