Flappy Bird in Excel VBA Part 10 - Creating Obstacles
This part of the tutorial shows you how to add obstacles to the game and how to make them move across the screen.

Return to the Flappy Bird in Excel VBA Tutorial index.

This part of the tutorial shows you how to create the image for the obstacles and how to incorporate them into the game using another class module. We won't make the obstacles collide with the bird just yet but we will make them move across the screen from right to left.

How the Obstacles Will Work

In the finished game I'd like the obstacle to look like a brick wall with a gap which the bird can fly through. If we created a single image containing a gap in the same place it would make the game quite boring and predictable. I don't want to have to draw lots of different images for the obstacle with the gap in different positions either as this represents a lot of work. Instead, we'll draw a single image representing a solid brick wall and write code to create a top and bottom half each time a new obstacle is created. The height of each half can be set randomly for each new obstacle making the game a little less predictable and more challenging.

Perhaps the single, major controversy from the original Flappy Bird game surrounded the image used for the game's obstacles. The green pipes were apparently so similar to those used in Nintendo's Mario series that there was a rumour that Nintendo applied legal pressure to have the game removed from sale. This rumour was denied by Nintendo but to avoid any possible recriminations we'll draw obstacles which look completely different!

We'll draw the wall image in a similar way to drawing the bird image earlier. If you don't want to bother doing this yourself just download the finished example from the top of the page.

Head back to the Sprites worksheet in Excel and choose a starting position for drawing the wall. In this game the wall is going to be 40 cells wide but the height will vary each time a new obstacle is created. We simply need to make sure the height of the image is sufficient to deal with the maximum obstacle height that could be created. The default height of our game area is set to 200 rows so, as the obstacle will never occupy the full height of the game, we could get away with creating an image somewhat smaller than this. At this point we're not sure if we'll increase the size of the game area at a later stage so we'll make sure the obstacle image is taller than it really needs to be.

Start by drawing a top border in the same garish colour which surrounds the bird image. Make this top border 42 columns wide.

Next, add a left and right border in the same colour with a height of 10 rows.

Next, draw a black outline for the first two rows of bricks as shown below:

Each line of bricks should have four blank rows ready to be coloured in.

Now you need to choose a colour for the bricks and change the fill colour of those blank rows. Here are the RGB values for the brick-red colour I'm using: 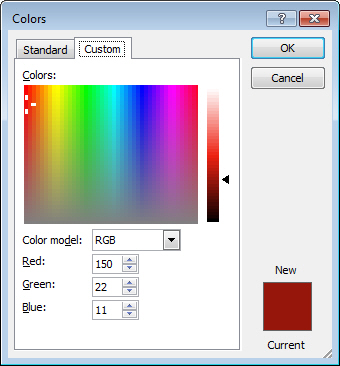 You don't need to choose exactly the same colour as me.

When you've coloured in the rows the image should look like this:

It's starting to look more wall-like.

Now we'll divide the top row into individual bricks, each of which will be 8 columns wide. Draw the black outlines as show here:

The first brick is actually only 6 columns wide. This allows us to overlap the bricks on different rows.

Next, we'll apply some highlighting and shading to the individual bricks. The colours I've used are defined as follows:

The end result of applying these colours should resemble this:

Hopefully when the game runs the image will move too quickly for the player to notice how bad it looks.

With the judicious use of copy and paste you should be able to do something similar for the second row of bricks:

Now that we have two complete rows of bricks we can finish the image by mainly copying and pasting. Start by copying cells A21:AP30.

Now start pasting the copied cells to build up the image.

It's tedious but still easier than building an actual brick wall. The final cell that I pasted into was A211.

Now we can add the black and pink bottom borders manually so that the bottom of the image looks like this:

All that remains is to give the cells a range name. Start by selecting the entire image except for the bright pink borders. Now click into the name box at the top left of the worksheet and call the range WallImage.

Don't forget to hit Enter to create the range name.

Now that the image has been created we can create a class module which uses it to create our game obstacles. Insert a new class module and rename it in the usual way. 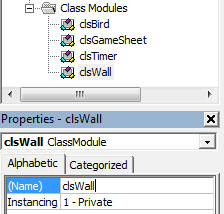 Rename the module as clsWall.

Declare the following items at the top of the module:

When we create a new instance of this class it will need to know several properties of the game sheet in order to create the obstacle in the correct place. We could deal with this in the same way we did for the bird class; by creating a property in the class to which we could assign a reference to the current game sheet. However, in this case we'll approach the problem in a different way; we'll create our own initialise method in the class which can accept a reference to an object of the game sheet class.

Add the following subroutine to the module:

'store a reference to the game sheet

'store a reference to the image range

'set basic properties of the wall

'make the gap 1/4 the height of the game

At this stage we need to create a new wall on the game sheet with a randomly calculated height. As we'll need to do this each time a new wall gets created it makes sense to create a separate procedure to do this. Add the following helper method to the module:

'subtract height of top wall and gap from game height

'get image for top wall from bottom of wall image

'get image for bottom wall from top of wall image

Although the walls don't move across the screen yet it's still worth testing that the code to generate them is working correctly. Go back to the modGameCode module and add the following variable to the top of the module:

Now add two lines to the InitialiseGame subroutine so that it looks like this:

'Called once when game first starts

Add one line to the TerminateGame subroutine to dispose of the Wall variable. The final subroutine should look like this:

'Called once when game ends

'Used to tidy up

Now head back to Excel and start the game. You should see the wall appear at the right hand side of the screen.

The wall should appear at the right hand side of the screen.

Try stopping and starting the game a few times to make sure that the gap appears at different heights each time. If it doesn't work check through the code carefully or download the working version from the top of the page.

Each time the game updates we need to move the wall to the left by the amount specified in the WallMoveRate variable. Head back to the clsWall class module and add a new public subroutine as follows:

'store the current positions of the walls

'calculate the position of the next column

'if so create a new wall

Now we need a procedure that will clear the wall image from its current position and redraw it at the new position. Add the following subroutine to the module:

Now we simply need to use these methods in the appropriate place in our game. Head back to the modGameCode module and add two lines to the UpdateAndDrawGame subroutine so that it looks like this:

'Called by the SetTimer function

'Runs once for each tick of the timer clock

Now go back to Excel and start the game. You should see the wall advances from right to left, disappearing when it reaches the left edge of the game area and reappearing at the right.

It doesn't matter whether you try to avoid the walls at this point.

If you find that the game doesn't work check the code carefully or download the working version from the link at the top of the page.

Now that we have the walls moving the next job is to detect when the bird collides with them and what to do when that happens.