The previous part of this blog looked at how you can create a view using the view designer, but diehard SQL programmers (like me) prefer to script our views.

Creating a view in script

Here's the basic syntax for creating a view:

CREATE VIEW NameOfView AS
SELECT something

The nice thing about this way of creating views is that you can use indentation and comments.  Here's how you could create the view in the previous part of this blog:

When you run this script, you would get the following output:

The output from creating the view shows that ... you created it!

To see the view itself, you'll almost certainly have to refresh your current list of views: 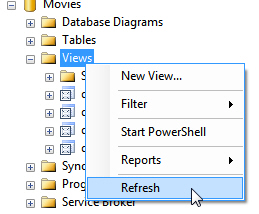 Your new view won't usually appear in the list until you refresh it.

Having created a view in script, how can you change it?  The answer is to alter it.  To do this, right-click on the view and choose the following option: 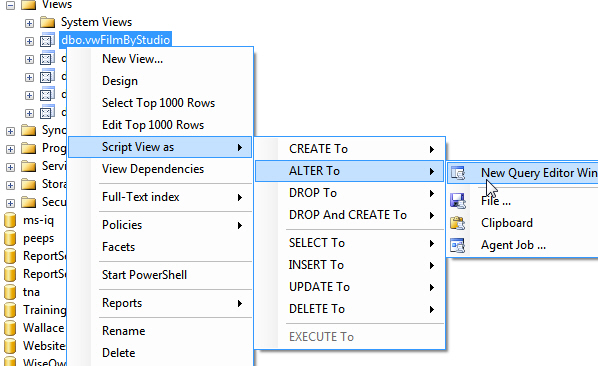 Choose to script the view to a new window, for alterations.

At this point, you can delete the commands which Management Studio adds at the top of your script:

I always delete these commands. They don't do any harm, but nor are they necessary.

What you're left with is an instruction to alter your view to do something different.  if you just wanted to change the final sort order, you could do this as follows:

SQL Server will throw away any old version of the view when you run the script above, and replace it with this new version.

This rather odd way of making changes to things in SQL Server means that once you've successfully run a SQL script to create a view, you can close it down without saving it.  If you need to get the script back, you can just right-click on the view to recreate it.

The Mickey Mouse (or at least, Mickey Owl) way to create views

Here's how I really created the view above.  First I went into the view designer and created a view: 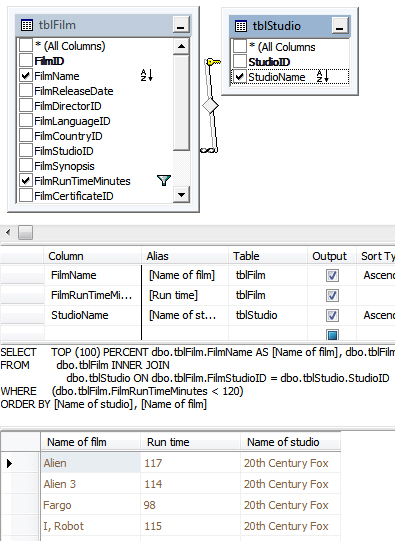 Part of the view, as created in the view designer.

I saved and closed this view, then right-clicked on it as shown above to script it for alterations to get:

ORDER BY [Name of studio], [Name of film]

I then tidied this up to get the neat script shown above.  It often helps to press CTRL + H  to replace table names with their aliases: 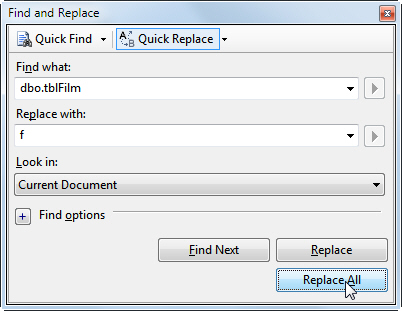 Replacing the long table name with the short alias.

The big advantage of this approach is that you don't have to remember how to create joins in SQL!

Be careful not to go back into the designer

Once you've scripted a view (adding comments, indentation and blank lines to make it easier to read), DON'T go back into the view designer! 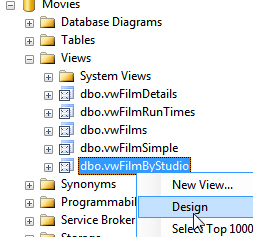 Once you go back into the view designer and save changes, you'll lose all of your beautiful formatting (which can be soul-destroying!).

We've now looked at designing and scripting views, but perhaps it's time to ask a more fundamental question: should you be using views at all?