To help understand what software can do, it can be useful to look at its strengths and weaknesses - which is what this blog aims to do for Power Automate Desktop!

Having looked at the 5 best things about PAD, what are the worst ones (again, this is in my highly subjective personal opinion).

1 - Everything is held on the server 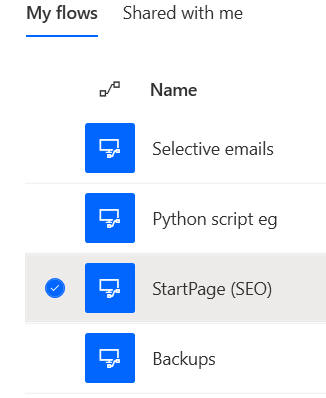 A few sample flows - I can double-click on each one to see its contents.

They're held in the cloud in an opaque format, so I can't copy them onto my desktop, email them to anyone, back them up or publish answers to any exercises I set.

I would guess that the flows are translated into an underlying language like PowerShell, Python or C#, but I don't know and can't tell (Wikipedia suggest that the flows are written in a language called Robin Script, but I have no way of knowing whether this is true).

In theory you can get a flow to fill in a web form for you, but in practice you will waste many hours (days?) trying to automate the completion of a web-based form: 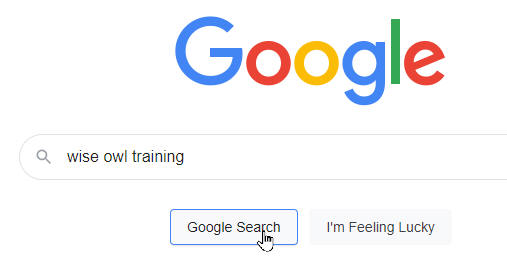 Even automating something as simple as running a Google search is not straightforward, and many authors make their websites intentionally resistant to robots (that's what Captchas are for!).

Likewise, it's possible to automate an Excel worksheet, but at the end of the day you're going to find this quicker to do in VBA:

You can do an impressive range of actions in Excel, but this is a tiny subset of what you can do using VBA macros.

There's a good debugger in PAD, which allows you to step through actions line by line, but there are two serious limitations:

4 - The user interface can be a bit clunky

Here are some examples of this.  To insert a variable in an expression, you click on the [x] symbol:

Who thought this was a good idea? You would expect this to clear the current field, not add something to it.

Selecting multiple actions, particularly in flows containing conditions and loops, is not as easy as it should be: 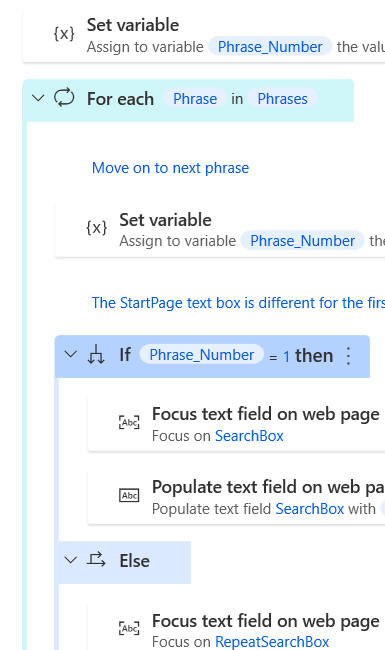 I still haven't worked out a reliable way to select a range of actions. You can click and drag with the mouse and hold down the Shift and Ctrl keys, but you never quite seem to get what you want.

Finally, the order of actions within a category can be bizarre:

These loop actions are in alphabetical order, but why? PAD doesn't follow this rule for other categories, and the order of the actions makes no sense.

5 - Flows can be frustrating for a programmer

This objection is unfair, since PAD isn't aimed at programmers (indeed, it tries to protect you from programming altogether).  But many readers of this blog will be programmers, and you - like me - will find it frustrating having to drag an IF action into a flow rather than just typing in the word (to take one example). 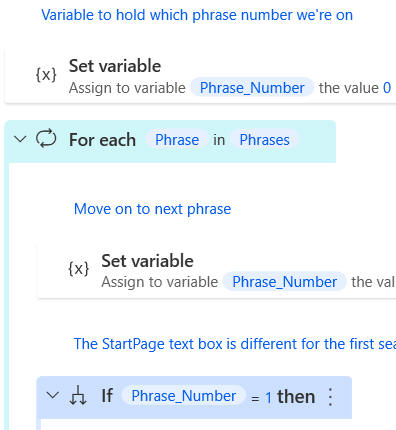 Ask yourself if choosing commands from a menu is going to help ... or annoy.

So those are my views: perhaps I should end with my recommendation!

But PAD is excellent at renaming files, both individually and in bulk, and you can certainly copy files to your heart's content?