History of Wise Owl: The early years
The story of Wise Owl starts in a basement in Chorlton-cum-Hardy in 1992, at a time when WordPerfect for DOS was still widely used and Lotus 1-2-3 ruled the spreadsheet roost.

I guess Wise Owl all started in a basement in Chorlton-cum-Hardy.

It was 1991 and Andy was working for what was then Deloitte Haskins & Sells in their Decision Systems group (which has now morphed into the Business Dynamics group in IBM - but that's a different story). He had taken a transfer from their London offices to Manchester (then based in the slightly dodgy red-light area of the city centre!). I was working for CTEC, one of the largest UK training companies back then.

Which song was the UK's Christmas Number One for the second time in 1991?

Andy had always known that he wanted to start his own company, and despite having had a few ideas, nothing was concrete enough to warrant leaving his nice, safe consultant position.

Meanwhile, there were several of us at CTEC who often talked about setting up a training consultancy together. We hated the conveyor-belt like approach of wheeling eight people in for a standard two-day course that only partially met their actual training needs.

There was a lot of frustration around the rigidity of the course structure and topics for the scheduled courses. People constantly asked about other features that weren't on the course topic list and we never had any time to show extras. Everything was bog standard and even when we were occasionally asked to deliver a course specifically for a client, trainers were not really involved in the process.

The beginning of an idea

Having shared all this with Andy on many cycle rides around Scotland and Wales, we soon got thinking that setting up together as a training consultancy partnership could be the answer. We each had lots of contacts, many of whom I knew would benefit from a better, more tailored approach. Andy had all the business know-how and management skills, and I knew how we could differentiate our offering.

I remember being very shocked when Andy arrived back from work one evening in February 1992 and announced he'd just handed in his notice. It was a big step and I was definitely hesitant about taking it, but the gauntlet had been thrown down, so a few weeks later I also became technically unemployed.

We enrolled onto a government scheme aimed at helping new businesses get started. It was helpful as we were given a mentor who helped us with our business plan and our sales and marketing plan, as well as generally point us in the right direction. There was a lot of box ticking, but some of the free courses in sales and marketing techniques were invaluable. This area of our business was, and has remained, our weakness. Neither of us had any training or any exposure in this area, and we knew to survive we had to be able to get our name out there and sell our services. 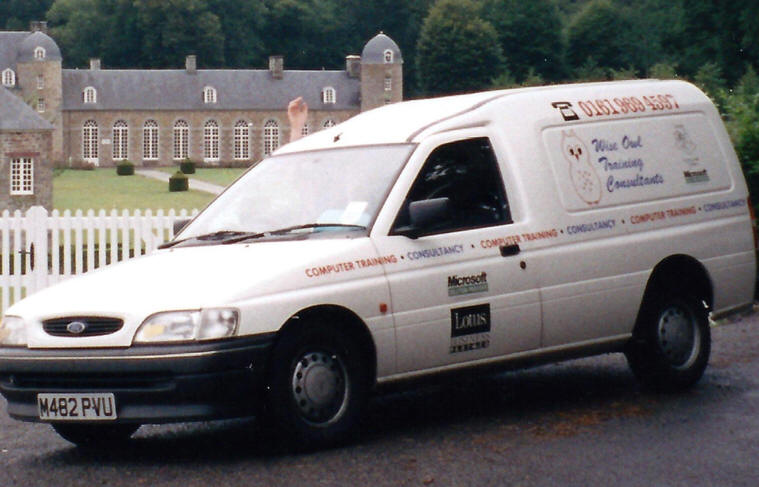 Wise Owl on tour in the early days

We officially started the business on 4th May 1992. From the beginning, we agreed that we would run an ethical company (Andy was adamant that we wouldn't work for any tobacco companies), we wouldn't sell to friends or relatives, and we would religiously stick to our contracts by not contacting any previous clients until that clause of the contract had expired.

We had to get clients, so every sales course that was offered, one of us attended. In those days it was all based around the dreaded "cold-calling". We'd come back from one of these courses really motivated, then make that first call and the day would get gloomier. We'd been taught how to get past the "gate-keepers" and find out the contact name and details. Sometimes it could take a week to even get as far as the name of the right person to speak to. It was often about timing, for example not calling when they were busy, so there was a lot of luck involved really! Sorry you hardened sales specialists out there, but being in the right time at the right place got more results than weeks of hard work.

To motivate each other we had to make it competitive. We had a diagram above our desks of a cereal bowl, and every time we made a cold call, we drew in a Rice Krispie. I don't remember who won, but I do remember how I absolutely hated having to make those calls. It was great when someone was interested, but just as much as they didn't want to waste their time talking to us, we didn't want to waste their and our time if they were not interested in our services.

Andy had negotiated a deal with our landlord (we were living in a shared house with four others) that we could rent the basement of the house he rented out next door as our offices if we did most of the work ourselves. One thing I remember very clearly from those early days is that the plumber we employed to do the work had part of one ear bitten off. He was a good plumber - if only we still knew him now! Our office had no natural light and was fairly cold most of the time, but at least we could concentrate on working down there with no distractions.

And of course, at the same time as getting clients on board, we had to have something to sell! We got started on creating our own product manuals and course contents, which had to stand out and offer something different to what CTEC and their competitors were offering. This is where we knew we had a USP to offer. We already knew how we were going to offer a different type of training.

In the next instalment of this series I will tell you all about what this was.

It was Bohemian Rhapsody by Queen! The single was re-released after Freddie Mercury's death and stayed in the top spot for five weeks. It was also the Christmas Number One in 1975.
This blog has 0 threads Add post