When you are programming in SQL, you often have the choice of using table variables or temporary tables. This blog considers whether one method is substantially quicker than the other (spoiler alert: not really).

The Example Used for this Speed Comparison

What I've chosen to do is to generate a table containing Wise Owl life advice: 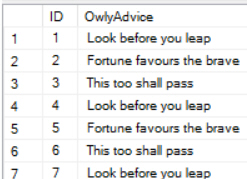 The advice becomes a bit repetitive, since it repeats after 3 rows.  The idea is to ensure we have a couple of reasonably authentic columns of data.

The SQL queries used each include a variable setting the number of rows to be generated:

-- the number of rows to generate

I'll try running the queries with this variable set to 100,000, 1 million, 3 million and 5 million.  The query should count the number of rows for each type of advice to produce something like this:

Given the advice will be randomly generated in equal amounts, the frequencies should be similar!