Flappy Bird in Excel VBA Part 13 - Playing Sounds
This part of the tutorial explains how to add sounds to the game using a Windows API function.

Return to the Flappy Bird in Excel VBA Tutorial index.

In modern games designing sounds and music is a huge and complicated task - what you can hear in a game is just as important as what you can see. Having said that, in our game the sounds are going to be extremely basic. In fact, we're not even going to create our own sounds. Instead we're going to steal some of the sound effects that are already included in Windows.

Using sounds that are a standard component of Windows will make sure the game will work on as wide a range of computers as possible. If you were interested in using better sound effects there are plenty of sites offering free files which you can find easily with a little Googling. Alternatively you could try creating your own sound effects using a free tool such as Audacity.

We'll create a class to encapsulate all of the code associated with playing sounds in the game. Start by inserting a new class module and renaming it in the usual way: 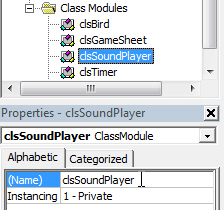 There's one Windows API function which we need to declare, along with a constant to make life a little easier when we call the function. Add the following code to the top of the module:

'Code is running in 64-bit Office

ByVal uFlags As Long) As Long

'Code is running in 32-bit Office

ByVal uFlags As Long) As Long

We won't use any other flags for this function in our game but, just for reference, here are a few other flags that we could have used. As usual for Windows API code I've copied this from the win32api.txt file:

' loop the sound until next sndPlaySound

Next we'll create a simple method in the class module which will play the sound that we choose. Add the following subroutine at the bottom of the module:

Now we need to choose the sound files that will be played. As I mentioned earlier, we're going to use standard Windows sounds for our game. You can find these files in a standard folder as shown in the image below: 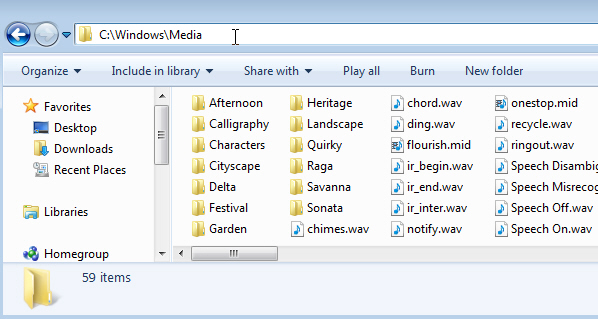 The standard folder is C:\Windows\Media. Depending on which version of Windows you have you may find different sounds are installed.

For our game we'll only use two sound effects: one for the flap and dive sound and one other for the crash sound. The standard paths of these sounds are:

We'll store these file paths in public variables in the class module. We also want to make sure that we can find the files if the user doesn't have Windows installed in the default directory of C:\Windows. To do this we'll use the Environ function to return the path of the Windows root folder. Add the following variables at the top of the class module:

Now create the constructor for class module by using the drop down lists at the top of the code page. Add code to the procedure so that it looks like this:

If you're using different sound files simply change the file paths to match the location of the sound files that you've decided to use.

You can see the result of the Environ function using the Immediate window - from the menu choose View | Immediate Window to display it:

Type this into the window and press Enter.

The result of the function is the directory in which Windows has been installed on the machine:

It's now fairly simple to concatenate a complete file path.

Playing Sounds During the Game

In order to play sounds we need to create a new instance of our sound player class. We could do this in several places within the project but for this particular game all of the sounds are associated with events of the bird. It therefore makes sense to declare our sound player variable within the clsBird class module. Go there now and add this declaration to the top of the module:

Now go to the Class_Initialize subroutine and add this line to the start of the procedure:

Now go to the Flap and Dive subroutines and add a line to each one so that they look like this:

Now go to the Colliding property. We need to play the crash sound whenever we detect a collision so find the two lines which say Colliding = True and add a line below each one to play a sound:

Running the Game with Sounds

Now all you need to do it test the game. When you press the up or down arrow keys you should hear the recycle bin sound effect which, if you suspend your disbelief for just a moment, almost sounds like the bird flapping its wings furiously. You should also hear the crash sound effect if you collide with the walls. Remember that you can press y to continue or n to quit if you collide.

If you didn't hear any sound effects make sure that you've turned your speakers on (as I've just neglected to do, duh!) and ensure that you've used the correct file paths. You can, as always, download a working version at the top of this page.

The next part of the tutorial looks at how to create a class for writing messages to the game window.